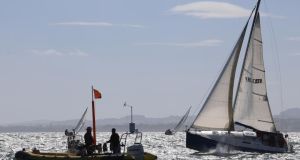 The Taste of Greystones Regatta is now in its third year. Photograph: David O’Brien.

There’s little evidence of recession at Ireland’s newest keelboat sailing centre where this weekend’s Taste Of Greystones Sailing Regatta has attracted a fleet of up to 120 cruiser-racers.

Visitors to the Co Wicklow harbour this weekend will see at first hand the 50 per cent expansion of the 2013-built town marina and a brand new sailing club under construction; both a major boost for Irish sailing on the east coast.

Wicklow’s biggest sailing event – now in its third year – already matches both of the south coasts Cork Week and the Sovereign’s Cup in terms of fleet size. Saturday’s event includes the annual East Coast Championships for Cruisers two and three.

It also includes a visiting ISORA offshore race fleet. The 350-member club has organised four starts for the third staging of its regatta; cruisers one, two and three and a white sails division too.

Visitors will get a first glimpse of the town’s new sailing club premises under construction in the new harbour that is expected to be finished by the year end.

The 100-berth marina, operated by marine firm BJ Marine, has recently added another 50 berths to accommodate demand for a growing fleet of cruisers at a venue previously restricted to dinghy sailing off the beach.

Two races will be held on Saturday afternoon for the east coast fleet who join the Taste of Greystones Regatta fleet for Sunday’s finale. Greystones sailor and London 2012 Olympic race officer Jack Roy will officiate.

Two short races on Sunday starting at 11.00 will finish up in good time to sample the complimentary refreshments at Greystones Marina.

Last night’s Dublin Bay Sailing Club Thursday race marked the end of the 2015 mid-week season but the country’s biggest club is gearing up for its annual Cruiser Challenge on the 5th and 6th of September 2015, the last major fixture of its 2015 calendar.

The National Yacht Club hosted event features the Beneteau 31.7 national championships. Like this weekend’s Greystones regatta racing will also be provided for Cruisers 0, 1, 2, and 3 and White Sails along with with Sigma 33 too.

More than 40 sailors, representing all four Provinces, raced a series of six races inside Dún Laoghaire Harbour. All four classes: Skud, Squib, Hansa 303 and 2.4m (single-handed) raced in every race with sailors of mixed abilities with varying physical, learning or sensory impairments and experience ranging from novices to a past Paralympian.

Last year’s winners, Munster, were a close second, four points behind the winners and 13 points ahead of Ulster while Connacht finished in fourth position just three points behind.