Ben Johnson not backing down from his take on dirtiest race 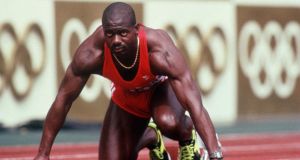 Ben Johnson prior to the start of the men’s 100m Final at the 1988 Olympic Games in Seoul, South Korea. Photograph: Tony Duffy/Allsport

So the dirtiest race in history just keeps getting dirtier, at least if Ben Johnson is to be believed. Which is not easy, when the truth about that infamous 100 metres at the 1988 Seoul Olympics adds up to one big lie.

The hallowed halls of the Old Library at Trinity College certainly feels like a strange place for Johnson to be telling some further truths, the somewhat delusional ramblings of the former Canadian sprinter coming against the backdrop of such esteemed history.

“Sprinters are born, not made,” Johnson says, early on, clearly believing he was destined to win that 100 metres in Seoul – even if some 48 hours after pointing his right arm towards the sky, destroying Carl Lewis and the rest of his rivals, lowering his own world record to 9.79, Johnson tested positive for the anabolic steroid stanozolol.

In the 28 years since, it seemed most of the truth about that race has come out, the fact only two of the eight finalists were not somehow guilty of taking performance-enhancing drugs, including Lewis, who although later awarded the gold medal, we now know failed three tests at the 1988 US Olympic trials.

What the fit, healthy 54-year told the small audience at Trinity, however, was that Johnson himself shouldn’t have even been in Seoul: two years earlier, after racing in Zurich, he also tested positive, only that was covered up.

“I don’t know what it was for. My coach just told me about. And yeah he got it covered up.”

Johnson is also not backing down on his theory the Lewis camp were responsible for his positive test in ’88: he’d no reason to believe he was ever going to test positive in Seoul, and claims he would take drugs again if given a second chance at it.

“Well that was my destiny, so probably, yeah, because I can’t choose my destiny, and if God choose it like that, so, yes. I only cared about myself. It’s a business. In 1988, winning the gold medal, I was happy in my heart. My conscious is clear, and I’m not ashamed of what I did, or I did to me.

“The shoe companies, the IAAF, all the money they made, and only the athletes get punished. But I believe in God, and I left everything in God’s hands. Yes, what I was doing I was wrong. I’m not saying everyone in track and field is doing performance-enhancing drugs, but in my case, I used drugs not to run fast. It was about recovery.”

“It was brought to my attention that most of my competitors were on performance-enhancing drugs. As a kid, growing up, I thought there were no drugs in sport. As I got better and faster I was put in a corner where, you know, I was told these guys are taking drugs. I said yes at the time, it was my own doing, because I wanted to be the best I can be, and I did.

“As time goes by, I never point the finger at one who tested positive, because we were all in the same boat, to be the best we can, make some money. The sport is corrupt, dirty, and it’s going to keep going like that. No one can stop it.

“It bothers me sometimes, and I interview myself, and ask did I do the right thing? At the time it was the right thing. But now, I would probably do it again, so to speak. I’m still alive, aren’t I?” Crossing the Line Sport was founded by former Irish Olympic rower Gearoid Towey; see www.crossingthelinesport.com