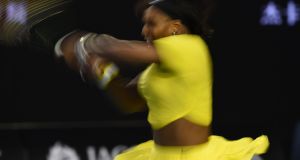 In this photograph taken with a slow shutter speed Serena Williams of the US plays a backhand return during her women’s singles match against Russia’s Daria Kasatkina. Photograph: Getty Images

The defending and six-time champion Serena Williams is into the fourth round at the Australian Open after a 6-1, 6-1 win in 45 minutes over the 18-year-old Russian Daria Kasatkina.

Williams won the first set of her Rod Laver Arena match in 22 minutes and was helped by four double-faults by Kasatkina. The American is spending her 153rd and 154th consecutive weeks at No1 during the two weeks of the Australian Open, the third-longest streak in WTA history after Steffi Graf’s 186 in a row and Martina Navratilova’s 156.

Maria Sharapova reached a career milestone on Friday, which came as a nice surprise after a tough match.

“Oh, wow. I’ve won 600 matches?” Sharapova said, when an on-court interviewer congratulated her for the achievement earned by winning her third-round match .The No5 seed then thought for a moment and laughed nervously. “Oh boy,” she said. “Is this friendly reminder that I’m getting old?”

The 28-year-old, a five-time grand slam winner, hadn’t dropped a set into the third round but struggled before beating the 22-year-old Lauren Davis 6-1, 6-7 (7-5), 6-1. After racing through the first set in just 26 minutes, Sharapova was broken twice in the second set, which lasted 77 minutes. She returned with more composure in the final set, making just five unforced errors and breaking Davis three times.

In the fourth round, Sharapova faces the up-and-coming Swiss teenager Belinda Bencic, who won her first two WTA titles in 2015 including Toronto where she beat Williams in the semis followed by the No2 Simona Halep in the final.

Sharapova could face Williams in the quarter-finals, which would be the latest in their long-running rivalry. Sharpova hasn’t beaten Williams since 2004, losing their last 17 meetings including last year’s Australian Open final.

But after Friday’s milestone, Sharapova took a moment to pause and reflect on her 600 career wins. “I think it’s a proud number,” she said. “I’ve been doing it a long time. That’s a fact.”

Sharapova was ninewhen she moved from Russia to Florida with her father, Yuri, to train at the famed Nick Bollettieri tennis academy. Three years earlier, when she was six, Sharapova was spotted at a Moscow exhibition by Martina Navratilova, who told her father that America was the best place to cultivate the young the young player’s talent.

It meant a two-year separation from her mother, Yelena, who stayed in Russia because of financial reasons and the wait to obtain a visa. Asked on Friday how she navigated the world of professional tennis as a young player, Sharapova credited her parents.

“You know, my father paved this career for me, that I just keep following,” she said. “He just really opened the door to my dream. I’m just kind of living it.

“My mother opened up the world to me culturally, educationally. So I got very different things from both of them. I really love what I do. Although I’d love to sit on the beach and read a book and drink margaritas, after a few days I get bored,” Sharapova said. “At 28 years old, I’m healthy and look forward to playing for many years.”