Australia have no intention of toning Ashes sledging down

‘We copped a lot in England, and we didn’t shy away from that’ - coach Darren Lehmann 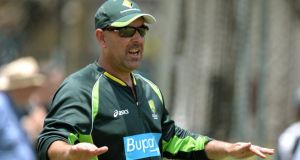 Australia have dismissed any possibility of changing the in-your-face approach that underpinned their demolition of England in Brisbane as a result of Jonathan Trott’s abrupt departure from the series.

England’s team director Andy Flower has called on both teams to strike the right balance between rivalry and respect after the fiery first Test, which cost Australia’s captain Michael Clarke 20 per cent of his match fee and may well mark the end of Trott’s international career.

Flower even said he was prepared to consider the idea of holding talks with his opposing coach Darren Lehmann, a former South Australia team-mate, in an effort to improve behaviour for the rest of the series. But Lehmann made it clear in a radio interview on Tuesday that he saw no need for that.

“From my point of view, Andy looks after his side, and I look after my side,” he said. “That’s what you do in the game of cricket. I played cricket with Andy – I know him and I talk to him all the time. But at the end of the day, he’s in control of the England cricket team and we have to try to get the Ashes back.

“Jonathan Trott’s gone home and I hope he gets well soon . . . but we’re still going to play really hard cricket, and that’s what we’re about. We copped a lot in England, and we didn’t shy away from that. That’s what happens – you expect it when you go away. So I don’t see what the difference is from England to here, considering we’re on the other end of it. That’s just the way it goes. Look, both teams played hard – and as long as it stays on the field, I’m happy with that.”

There was further evidence of Australia’s unwavering determination to settle old scores from Peter Siddle, the experienced fast bowler who was involved in the angry exchanges with Jimmy Anderson at the end of the Brisbane Test.

“Anderson brought it on himself,” Siddle said of the abuse he received from several Australians, including Clarke, who was punished by the International Cricket Council after being caught on the stump microphone telling the England bowler to “get ready for a broken arm”.

“So fair’s fair. There was a lot of other stuff going on and James Anderson was in the thick of it and a culprit for it all happening. He is one of the leading wicket-takers in the world so he is happy to have a chirp, but as long as Mitchell Johnson keeps bowling them around his ears, that will quieten him up pretty quickly.”

Significantly, Australia have taken no disciplinary action against David Warner, who had been unusually critical of Trott at the close of the third day – around the time Trott was agreeing with Flower that it would be best for him to head home.

Warwickshire have confirmed that Ashley Giles, their former coach who is now assistant to Flower and takes charge of England in all forms of one-day cricket, has been in touch with Trott and that the club would be delighted to see him back at Edgbaston – but only if he is convinced he is ready to play again.

“He is one of ours,” said Colin Povey, the Warwickshire chief executive. “We are very proud of his achievements. He’s a fantastic cricketer. When someone comes home, off tour, it’s clearly concerning. Our thoughts are with him and Abi (as wife) and the family. They need to have a bit of space and time to sort themselves out. But we’ll be giving him our full support.”

Povey confirmed that Warwickshire had always been aware of Trott’s stress-related illness. “Yes, it’s something he’s had to manage over time,” he added. “It’s something that seems to be increasingly common. The schedule is pretty relentless. They are away 210, 220 days a year. It’s something that catches up with people.

“I’ve spoken to those people close to him. But the important thing is to give him a few days to clear his head.”