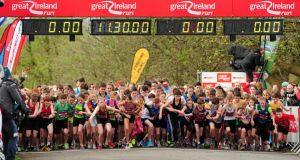 
The daughters of Sonia O’Sullivan and Catherina McKiernan ran in their mother’s footsteps yesterday when they came first and third in the junior mile race at the Spar Great Ireland Run in Dublin’s Phoenix Park.

The 10k Great Ireland Run was won by current world cross country champion Japheth Korir of Kenya who finished in 29 minutes 12 seconds. The first woman home was Iwona Lewandowska of Poland in 33 minutes and 39 seconds.

Irish man Paul Robinson won the Spar Great Ireland Mile in a time of four minutes and two seconds. Runners from Kilkenny helped their county to win the Ronnie Delany trophy after it was deemed to be the county with the fastest runners.

Thousands of runners took part in yesterday’s event, alongside international athletes and some famous faces. Coronation Street star Paula Lane, who plays Kylie Platt, was at the race, as was Fair City actor Ryan Andrews who plays Seán Cassidy.