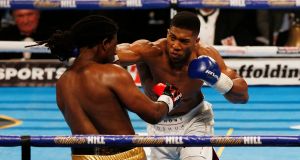 There has not been a heavyweight since Joe Louis more than 70 years ago so unmoved by success as Anthony Joshua, the calm new prince moving serenely into a jungle of fevered speculation. And it is clear that no amount of provocation by the considerably louder Tyson Fury will bounce the quiet man from Watford into a world title unification fight before he is ready.

Far more likely than Joshua responding to a shout-out by the WBA and WBO champion to put his IBF belt on the line this year is the prospect of lower-profile defences against a couple of hand-picked IBF challengers at the O2 Arena, where two crunching right hands left American Charles Martin helpless at his feet after a minute and 32 seconds of round two in front of 20,000 stunned but delighted fans on Saturday night.

“We’ll have to look at the top 15,” Eddie Hearn, Joshua’s promoter, said. “[Carlos] Takam’s fighting [Joshua] Parker. [Kubrat] Pulev’s fighting [Dereck] Chisora, so that’s four; [Alexander] Ustinov’s still in there, he’s fighting [Luis] Ortiz. AJ needs a week, 10 days, to rest. Then, if he’s ready, I don’t see a reason not to get back to prepare for early July.”

Martin, a heavy hitter unbeaten in 24 fights, showed no ambition to beat the count, although he went through the ritual motions of bemused and unconvincing protest.

It has become a familiar scenario in all of Joshua’s contests and there is every prospect of it continuing. He has arrived at last, a world champion at 26, only nine years, one Olympic gold medal and 16 professional bouts after first putting on gloves to escape a life of potential crime on the streets of his hometown.

This surely was an occasion for the winner to savour after predictions by so many experts that this was a premature test of his undoubted skills.

However, while others danced, sang and staggered into the night, Joshua moved from the scene of his triumph to the quiet of his dressing-room as if he had just gone to the shops to collect a pre-ordered delivery of his favourite Nigerian pounded yam.

Would nothing stir him to ecstasy? “I dunno, man,” he said with a smile. “Probably going to heaven.” And the easy laughter flowed. The champ would not be going to church with his mother on Sunday morning, he admitted, because he now had mountainous media obligations, and they will only grow more onerous. As Joshua saw it: “You can’t let it get to your head when you win, and you can’t let it get to your heart when you fail. You’ve got to take it as it comes.”

Lurking in the wings

Joshua joins Fury as Britain’s second world heavyweight champion – with a former title-holder, David Haye, lurking in the wings to return to the highest level at 35 – in a division as fractured as ever and as predictably ripe for exploitation. The anticipated Fury storm on Twitter began within moments of Joshua’s victory at his favourite venue. He was “slow and ponderous”, said the Mancunian, in stark contradiction of the evidence.

“He needs to represent himself like a champion,” Joshua said. “He talks like a kid. He should be happy I won – it brings some limelight back to the heavyweight division. Why hate on someone who’s just trying to get somewhere in life? Once he gets [Wladimir] Klitschko out of the way, me and him can get back to talking.”

Matthew Macklin is considering his future in the ring after labouring to a points win against Blackpool’s Brian Rose in their IBF Inter-Continental title fight on the undercard.

Macklin had said he would retire if he lost the fight, but admitted that the manner of his win also left him with some searching questions to answer. He said: “I don’t know what will happen now. I will have to think about it.” Guardian Service