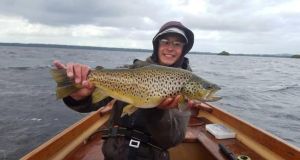 The heaviest fish on Sheelin last week was a trout of 3.6kg caught by Slane angler Christopher Defillon. 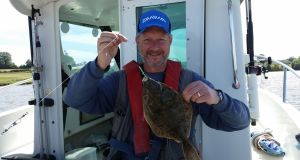 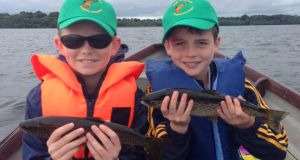 Garmin, global leader of satellite navigation, has announced its support as a key sponsor for this year’s Rosslare Small Boats Festival, one of the most prestigious small boat fishing events in Europe, which runs from September 10th to 17th September, across the south-east coast of Ireland.

The festival started in 1985 with just five boats and has gone from strength to strength, with 45 boats participating this year. The quality of the fishing and variety of species available has attracted a high standard of competitor, with 138 anglers travelling from the UK and Ireland.

Festival chairman John Belger said: “Garmin products are very popular with small boat fishing enthusiasts so it is a real coup for us to have such a well-respected brand on board. I’ve no doubt they will be highly sought after by all teams taking part.

“We are also proud of our association with our other sponsors, Daiwa Sports, Inland Fisheries Ireland, Fáilte Ireland, Wexford Council and IPB Insurance.”

Gail Cook for Garmin UK and Ireland, added: “Whilst the competition was fierce last year, with up to 38 different species recorded, the educational benefits with regard to practising catch and release are hugely beneficial in terms of conservation and creating public awareness of our sea fisheries resource.

“I’ve no doubt the top three winners will put the new Garmin echoMAP CHIRP, Panoptix and Striker 5dv equipment to great use, helping them achieve the clearest scanning sonar of fish and structure on the market,” said Cook.

Good day out in Courtlough

Conditions on the day were difficult, however, all anglers managed to catch at least one fish each. Topics covered included fly fishing set-up and casting, and prizes were awarded to those lucky on the day.

Oisin Cahill of Dublin Angling Initiative, said: “It was fantastic to see so many anglers of different ages take part in the trip. We are always welcoming young people who might be interested to consider trying it out. For further information, contact oisin.cahill@fisheriesireland.ie.”

Boyne Valley Fishing Hub consists of clubs along the River Boyne with a focus on developing youth angling. https://www.facebook.com/groups/ boynevalleyfishinghub/.

Peter Byrne of Lough Carra Anglers organised the annual catch-and-release competition on Carra/Mask last Sunday in aid of the Water Protection Group. The event attracted 46 anglers and 89 trout were recorded.

Philip Clesham from Castlebar came out on top with an overall length of 241cm. Philip also had the longest fish of 56cm. (Using the World Cup conversion chart, his fish would convert to almost 2kg.)

“Heavy rain over the past week has raised water levels on Mask significantly. Anglers who may not have seen their boat recently may be advised to do so,” Cusack said.

1 Golf in Level 5 Covid restrictions: Clubs still waiting to hear if they can remain open
2 Hugo Keenan could start in changed Ireland team against Italy
3 Johnny Sexton: ‘It hurts more when you are captain’
4 Tokyo dreaming: Ireland’s Olympics team slowly taking shape
5 Gerry Thornley: After 32 weeks the Six Nations is back up for grabs
Real news has value SUBSCRIBE