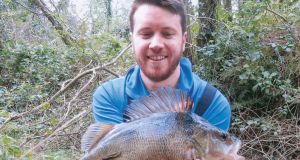 Andrew Wolsey with his specimen perch of 2.75lb, caught on Lough Erne, in April.

Inland Fisheries Ireland (IFI) has updated its guidance regarding angling to reflect the latest Government and National Public Health Emergency Team (NPHET) advice. From Tuesday, May 6th, anglers have been allowed fish in a location less than or equal to 5km from home.

State fisheries, owned/managed by IFI, are open with the exception of Galway and Moy fisheries. In addition, ESB fisheries are now also open.

The status of private and club-run fisheries is a matter for the individual fishery manager/committee.

Information regarding the purchase of permits and salmon licences is available online at fishinginireland.info.

IFI will continue to monitor the situation and make further updates as appropriate in line with the Governments Roadmap for reopening society and business. Further guidance is available at fisheriesireland.ie/Notices/covid-19-statement

In England, 1925, there was a fishing club on the river Test in Hampshire that was the last word in exclusivity. The club had about 32km of the river, widely recognised as the best chalk-stream in the world. The club guarded its privacy jealously and few things are known about this most exclusive club. Its members were, in the main, elderly, extremely rich and well connected. New members were elected only when a member died and new members were always known to existing members. Indeed, it is almost certain they will have been at school together, at either Eton, Winchester or Harrow. The one criteria that members did not have to meet is ability. In fact, being good at fishing was considered rather suburban and could lead to enormous problems for the club’s gillies and river-keepers.

A wonderful example occurred on a glorious day in May when one of the club’s most elevated members was fishing. The gentleman is question was a high court judge, but on the few occasions when he managed to catch fish it had far more to do with luck than judgement. He was a very bad fisherman with a very bad temper who was always threatening to sack people who didn’t treat him with the utmost respect.

On this particular day mayflies were hatching all across the river; fish were rising left, right and centre, but the high court judge, fishless and supremely incompetent, was completely baffled.

“Not much rising today,” he said in all innocence.

The keeper was in a difficult position. Good manners demanded that he say something, but he was momentarily stumped. What on earth could be say that would spare the high court judge’s blushes, yet not be an outrageous lie?

“They don’t know a well-presented fly when they see one, sir,” he said with a smile.

Another yarn comes from Scotland in 1810. Wealthy fishermen with the very best tackle money can buy don’t inevitably catch the most fish, nor even the biggest individual specimens.

Skill is more than half the battle and luck is always lurking ready to upset the arrogant claims of the so-called expert. This is part of the great appeal of fishing.

A case in point was the shoemaker of Aberlour whose success in landing one of the biggest salmon ever caught in Scotland – and with the most rudimentary tackle – was still being celebrated long after he had gone to meet his maker.

Duncan Grant was a good shoemaker but neglected his job for the river. He was obsessed with fishing despite having a heavy, clumsy old reel and a rod that had already seen better days.

One day he was fishing the Elchies Water north of Aberlour. He tried one or two pools without success before arriving at a very deep, rapid pool called the Mountebank. He threw his line out, down and across the water and no sooner had it begun to settle than a long, steady pull told him a fish had taken. He lifted his rod and an almighty battle began.

Grant’s cast – a short length of fine line nearest the hook – was made from some 30 pieces of horsehair woven into one thick strand.

By the standards of the early 19th century this was strong tackle indeed, but it had little effect on the fish, which moved steadily up and down the pool, but always staying deep.

Seven hours later Grant still hung on exhausted and on the verge of deciding to cut his line and accept defeat.

Then he had an idea that would allow him to rest, but also give him warning if the fish – sulking at the head of the pool under a huge boulder – made a dash for it. He lay on the bank on top of the rod butt, pulled off several loops of line from the reel and threaded them ingeniously through his teeth.

After a three-hour sleep he was woken by a savage pull on his head. He leapt to his feet with the rod well up, aware that the fish had left the sanctuary of the boulder and was heading rapidly down the pool.

Continuing this week with the only specimen perch of 2019 as recorded in the Irish Specimen Fish Report, I include Andrew Wolsey’s fish of 2.75lb (1.25kg), caught on Lough Erne in April.

My sincere condolences are extended to the family of the late Richard (Dick) Willis, who died last week, peacefully, at home. Dick was known extensively throughout the angling world and what a fine angler he was too.Indeed, as an international angler, one of his many feats came in 1966 by winning the World Cup Trout Championships on Lough Mask. His catch consisted of seven trout on heat day and a further five on finals day on Golden Olives and Bibios. May he Rest in Peace.

Due to the Covid-19 pandemic, this year’s world cup trout championship on Lough Mask over the August Bank Holiday will not be going ahead in 2020.