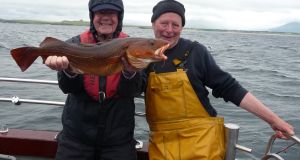 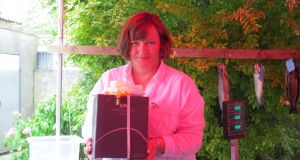 Dorrie Gibbons, brainchild (and best lady angler) of the Cast a Line for Autism fundrasier 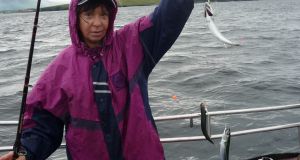 Mary Sheridan of The Irish Times with a string of mackeral 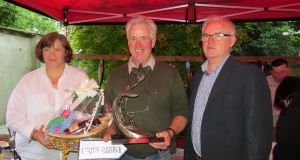 The National Anglers’ Representative Association (Nara) is preparing for an angling dispute following the recent announcement by Inland Fisheries Ireland that it will stop producing freshwater trout.

In a statement, Nara said the decision represented a significant change in IFI policy and was made without proper consultation.

“Nara wrote to the IFI board, asking for plans to cease trout production operations to be postponed until such time as consultation had taken place,” the statement read. “Unfortunately, Nara was unable to convince the board to postpone the exit from trout production.

“In 2015, IFI engaged Canadian Aquaculture Systems Inc to conduct an expert review of its fish farming activities with a view to making recommendations to support optimisation of production of trout in an effort to identify challenges in the production process and to propose practical solutions to enhance productivity and performance.

“The Canadian company produced An Expert Analysis to Support Optimised Production of Freshwater Trout. This analysis identified various options aimed at addressing deficiencies in the trout production process. However, it did not recommend that IFI exit trout production operations.

“In 2013, a Socio-Economic Study of Recreational Angling in Ireland valued recreational angling at €755 million annually to the Irish economy and stated that the sector is responsible for more than 10,000 jobs.

“If the decision to cease operations proceeds, jobs will be lost and the €755 million generated through recreational angling will suffer.”

Nara will seek a mandate to take whatever action is necessary to ensure the recommendations in the Canadian review are implemented.

It has been reported that about 2,000 sea-trout and some 200 salmon were released by fishery officers from the mill-race at Clohamon, Co Wexford on the river Slaney last Monday and Tuesday.

According to sources, most of the river flow is being diverted through the millrace to generate electricity for a privately owned commercial enterprise. Obviously, the grid to prevent the fish from entering the mill-race is not working.

“This is a total disgrace in this day and age of so-called salmon conservation. How can the river stocks survive? Action needs to be taken urgently to ensure survival of the Slaney which appears to be in continual decline,” the report said.

The Slaney River Trust would be grateful if all anglers could join their association and lend their support. See slaneyrivertrust.ie.

More than 3,000 fish died over a 4km stretch of the Clodiagh, a tributary of the Tullamore river. This consisted predominantly of trout, but included salmon, lamprey, minnow and stoneloach. The fish kill was as a direct result of a chemical discharge from the Irish Water plant in Clonsalee, Co Laois.

Judge Catherine Staines directed Irish Water to pay IFI’s legal costs of €5,016 and to cover the full cost of rehabilitation works downstream of the incident area.

“This was a serious pollution incident which will take a considerable number of years for the river to recover,” said the IFI’s Amanda Mooney.

Corrib v Mask for a great cause

The “Cast a Line for Autism” competition held on Corrib and Mask last weekend was a resounding success. Now in its third year, this year’s event attracted 40 anglers to helped raise €3,500, bringing the overall total to date to a whopping €11,000.

Lydons of Cong was again central to the day and the option to fish either Corrib or Mask was an added attraction to anglers. Not for the first time Corrib returns won out, hands down!

Dorrie Gibbons is the brainchild to this fundraiser, and she would like to thank all those who supported this great cause. Also, thanks to the sponsors who donated fantastic prizes and a special thanks to Lydons Lodge for its continued support.

A group from The Irish Times enjoyed their stay in Mullaghmore, Co Sligo last weekend. They went fishing on Saturday with charter skipper Peter Power aboard his 33-ft vessel Prospector 1. Setting out from the picturesque seaside village, we soon encountered mackerel by the score, in fact, enough to “feed a small army” and plenty left over for bait purposes.

Steering in a southern direction, with Classiebawn Castle on our port side majestically poised on a hilltop overlooking the Atlantic, our second stop-off at Inishmurray Island proved very successful for Ed Higo.

Fishing Hawkeye lures with mackerel strip, and almost on his first cast, Ed shouted: “I think I’m stuck on the bottom”. Surprise, surprise: after a hectic struggle he brought up a magnificent cod of at least 4.5kg (10lb), which Peter safely netted. It was a fish of a lifetime and certainly Ed’s biggest cod to date.

Throughout the day we moved to established marks within Donegal Bay catching a good variety of species, including pouting, coalfish, cod, wrasse (three varieties) and pollock to 3kg. On returning to port, we learned of three similar charter boats that opted to fish for shark, and actually caught seven, between 27kg (60lb) to 45kg (100lb)!

Peter is a top-class skipper with a vast knowledge of seamanship. He strenuously endeavours to put anglers over fish and can even pinpoint the likely species below. For bookings, 353-087-2576268 or papower@iol.ie.

The McDonnell Cup competition will be held this Saturday, August 6th on Sheelin, Co Westmeath, fishing 11am to 6pm from Kilnahard Pier. Entry is open members only; membership is available on the day.

“Still with Sheelin”, a youth angling day, will be held on Saturday, August 13th. It will include fly tying, casting and fishing, followed by a barbecue. For further details on both events, contact Thomas Lynch at 087-9132033.