Belgians brought in their number one singles player David Goffin, but to no avail 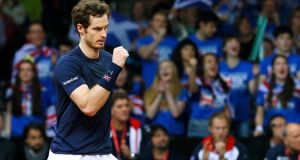 Andy Murray took centre stage once more as Britain won the doubles rubber to move within one victory of the Davis Cup title.

The Belgians sprang something of a surprise by bringing their number one singles player David Goffin, no doubt inspired by his comeback against Kyle Edmund on day one, in to partner Steve Darcis.

Goffin played an excellent match but he was outshone by British number one Andy, who was the only player not to drop serve in a 6-4 4-6 6-3 6-2 triumph.

One more win for the world number two, who beat Ruben Bemelmans on Friday, over Goffin in the reverse singles on Sunday would give Britain a first Davis Cup title since 1936.

And there would be no more fitting way to clinch it, with Andy looking to become only the fourth man to win 11 rubbers in a year.

The atmosphere, if anything, was a notch higher than on Friday, and this time it inspired the Belgians.

Goffin, in particular, had been cowed by the occasion against Edmund but he was on form straight away here as he and Darcis gave as good as they good.

With a top-two singles player and a top-seven doubles player, Britain were big favourites, and perhaps even they were surprised by the quality from the other end.

Andy found himself facing a break point in the in the ninth game but Darcis missed a return, and it was the Murrays who took the set in the next game.

Darcis missed a routine smash to set up the chance, which Andy seized with a volley to Darcis’ feet before bouncing back to his seat in the manner of an excited schoolboy.

In the semi-final against Australia and particularly the quarter-final against France, it had been Jamie’s doubles prowess that really came to the fore.

But this time the elder brother was struggling to find his touch and his timing, and the Belgians pounced in the third game of the second set.

Jamie saved two break points but double-faulted to bring up a third and this time Goffin put away a smash, to the delight of the raucous crowd.

Britain had their chances but let their opponents off the hook on a couple of occasions and Darcis served out the set to love.

It was Goffin who was really impressing, though, despite his lack of doubles experience. The world number 16 had only won two tour-level doubles matches in his career and his only previous Davis Cup doubles match was on his debut against Britain in 2012.

He drilled a return down the line to break Jamie again in the third game of the third set as Britain’s position became increasingly precarious.

But suddenly no one, apart from the imperious Andy, could hold serve. Jamie raised his level at the perfect moment to retrieve the break straight away against Darcis and two games later it was Goffin in trouble.

The Belgians seemed to have been let off the hook after a line judge wrongly called a pinpoint Jamie lob out but they won the replayed point and the one that followed to lead 4-2.

Jamie then dropped serve again but a third break of the Belgians left Andy serving for the set and he made no mistake.

It was becoming a question of who out of Jamie and Darcis could hold their serve, and the Belgian dropped his for a third straight time as Britain took an early lead in the fourth.

Jamie then saved seven break points in the next game, which proved to be the final chance for the home pair before Jamie served out victory after two hours and 49 minutes.