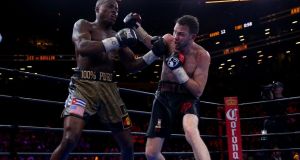 One of the oldest adages in American sport is that a tie is like kissing your sister. That might explain why so many of the 12,000 strong crowd at the Barclays Centre in Brooklyn last night reacted angrily to the judges scoring Andy Lee’s middleweight bout with Peter Quillin as a split draw.

Those booing so lustily might have to watch the video before they conclude that here, at least, tallying the fight (113-112 Lee, 112-113 Quillin, and 113-all) seemed just about a fair result.

Indeed, after a tumultuous ending to the first round, when he was in all manner of bother, Lee looked far more likely to ship a heavy defeat than emerge with a share of the spoils, a purse of $625,000, and a growing reputation for resilience, courage and ring-craft. Several times in the first half of this 12-rounder, the reigning champion appeared out of his depth and fortunate that Quillin’s failure to make weight on Friday meant Lee’s WBO title was not on the line.

In a made-for-television moment, Quillin had walked to the arena from his home just a few blocks away and he got down to work much faster. After a prolonged, cagey opening, the contest finally exploded into life when he delivered a concussive right hook that sent Lee to the canvas with half a minute left on the clock.

A blow that showcased exactly why the fighter nicknamed “Kid Chocolate” is higher-rated than the Limerick man, he followed it up with a barrage as the seconds ticked away. His legs buckling beneath him as he groped desperately for the ropes in the corner, Lee was, literally, saved by the bell. At that particular moment, the prospect of him entering anything other than a loss on his ledger looked slim.

Quillin remained in charge thereafter, putting Lee down again in the third, albeit in spurious circumstances. While ruled a knockdown by referee Steve Willis, the video revealed it had more to do with Quillin standing on Lee’s foot than the power of any punches. By then though, the champion was bleeding from a cut on his left eye, and this bout where long periods of posturing were punctuated by short and thrilling exchanges looked like it could only go one way.

But, Lee is made of different and very special stuff. Somehow, he forged a comeback of such valour that it will have done his marketability among promoters and his popularity with fans here a great deal of benefit.

Before the start of the seventh, doctors examined Lee and, fleetingly, there seemed a real chance his evening might be ended prematurely. Once they allowed him to continue, however, he embarked on his task with renewed vigour. Less than a minute from the end of the round, he measured Quillin up with a left then unfurled a dramatic right that dropped the former WBO champion for the first time in what was the 32nd outing of his career.

Although he’d shown signs of life in the sixth, the knockdown gave Lee some momentum at last, and he began to demonstrate all the nous picked up during those years spent working with the late Emmanuel Steward in Detroit. For a time, it seemed he might orchestrate his usual crowd-pleasing routine of falling behind on the scorecards before knocking his opponent out.

While that ending was not in this script, in later rounds, Lee danced, occasionally smiled and carried the mien of somebody who knew he’d weathered the worst of a rather serious storm. Even after a year out of the ring, Quillin, to his credit, didn’t wilt when Lee got on top. Heading into the closing stages, both corners exhorted their men to do more to sway the judges, and although the stats showed Lee threw more punches (299-267) and landed more (113-103) too, neither really did enough to make a persuasive case as the clock ran down.

As if realising time was about to expire, there was a hectic exchange in the centre of the ring in the waning moments, invigorating the crowd but hardly impacting the judges. At the finish, both trainers came through the ropes to lift their respective charges in the air victoriously, more in hope perhaps than expectation.

“It was a hard fight to score,” admitted Lee. “He had the knockdowns but I think I boxed more consistently, especially down the stretch. If they had given it to him in his hometown, I don’t suppose I could have argued with it. But I never give up. He was going to have to take me out on a stretcher.”

And the chance of a rematch, something being floated almost immediately?

“I’d be happy to fight him again, and for my title next time.”

As long as he can make weight. Of course.