America At Large: Cardinal rules just there to be broken 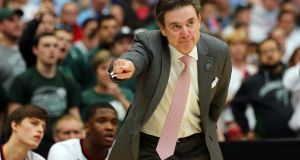 Seven months ago, a 43-year-old woman in Kentucky called the NCAA to allege she’d been hired by the University of Louisville to have sex with teenage basketball stars. When her initial attempts to tell this tawdry tale to the governing body of collegiate sport were roundly rebuffed, she went looking for another outlet.

Less than a week after publication, Katina Powell’s Breaking Cardinal Rules: Basketball and the Escort Queen is currently one of the top-five sports books on Amazon. Nobody in a position of authority is ignoring her claims anymore.

Written with the assistance of a Pulitzer Prize-winning reporter, the book contains lurid and extensive details, including text messages exchanged between her and the university’s then head of basketball operations, Andre McGee. Between 2010 and 2014, Powell and other prostitutes, including her own daughters, were brought to parties at one of the college dormitories. She says their job was to strip for and sleep with high-school phenoms who were considering declaring for Louisville, a perennial national title contender over the past decade.

“I felt like I was part of the recruitment team,” said Powell. “A lot of them players went to Louisville because of me.”

In a country where websites are dedicated to somehow ranking the best nine-year-old point guards in the nation, it’s not difficult to imagine how insanely competitive the environment is when colleges subsequently try to sign these kids in their late teens.

Inevitably then, coaches and their supporting staffs try all manner of persuasive techniques when these players are brought to campus on recruiting trips specifically designed to convince them to commit to their programme.

An impressionable youngster might be walked into a cavernous university arena just as the floodlights come on and a voice comes over the tannoy waxing lyrical about the boy’s future achievements in that very stadium. A moment to fire up any adolescent imagination.

He could be handed a Sports Illustrated magazine, his photoshopped face beaming from the cover leading his would-be suitors to a famous triumph. Or, in a 21st century twist on that gimmick, he may go home with a copy of his favourite video game, his image on the box in what the college hopes will be his new uniform. Positive visualisation meets very slick marketing.

These are some of the well-worn routines deployed by coaches hoping the bright young things will pick their college over all others. However, in a sport where one or two difference-makers can often be enough to turn also-rans into national champions, boundaries tend to be pushed. Some of the unofficial stuff that goes down during a prospect’s tour of campus facilities isn’t always featured in the brochure. After all, telling a 17-year-old kid the canteen food is really quite tasty is only going to go so far.

For over half a century, some universities have asked female students to assist in the recruitment process by working as hostesses when the best athletes come to have a look around. Their job is to entertain the visitors, maybe even bring them to a party to give them a glimpse of student nightlife.

And, of course, if there’s alcohol available at that shindig, and the young man also happens to get lucky, well, that probably won’t do any harm in terms of helping him make up his mind.

That a Deadspin.com investigation of that practice revealed these groups of women often went by charming titles such as Texas Angels, Bama Belles, the Hurricane Honeys, the Black-Eyed Susans and the Bengal Babes sums up the nature of that particular arrangement.

Not to mention that many colleges have cracked down on it over the past decade since too many of these visits also spawned sexual assault allegations.

Even against that depressing background, the Louisville scandal is especially murky.

The university has launched an official investigation and Rick Pitino, the team’s head coach, professed himself to be shocked at the whole business.

A devout Catholic who has a priest sitting on the bench during games, Pitino survived a scandal some years back when an extra-marital affair culminated in him paying for a lover to have an abortion.

Like all iconic coaches, he has a reputation for micro-managing, to the extent that players and college officials generally do nothing on campus without his permission.

It also says much for the warped moral code of collegiate sport that some of the fallout has centred on the motivation of those who assisted Powell in bringing her story to a wider audience.

Around Louisville, conspiracy theories already abound accusing rival institutions, the Universities of Kentucky and Indiana, of orchestrating the whole debacle. If the book stands up to further scrutiny, the blame may lie a lot, lot closer to home.