Fionnuala McCormack rises to the challenge in Denmark 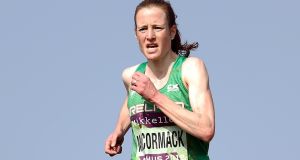 The high praise which greeted Fionnuala McCormack’s performance at Saturday’s World Cross Country in Denmark is built on several fronts. On the Aarhus course at least partly designed to test the East African challenge, McCormack was one of the few Europeans to properly rise to it.

In the end her 18th place left McCormack second best European, behind the East African dominance yes, only ahead of all the British, American, Australian, Canadian and Japanese runners, all of whom sent full teams. Just six months after giving birth to daughter Isla, the strength of her performance was particularly impressive.

It was also her second best placing after Bydgoszcz in Poland in 2013, where she finished 14th and top European overall. This time only Denmark’s home favourite Anna Emilie Moller was in front, three places ahead of her in 15th, the rest of the leading positions filled by Kenya, Ethiopia, Uganda and Tanzania.

Best of the lot was Kenya’s Hellen Obiri, the first woman in history to win IAAF World titles on the country and on the indoor and outdoor track; the only man to achieve that feat is Ethiopia’s Kenenisa Bekele.

The 29-year-old Obiri hit the front early, while back around the at times brutally testing course the chase was on: McCormack was clearly relishing it, closing on the leaders all the time, her 18th place also the very best of the Irish on the day. Sara Treacy from Dunboyne AC finished in 73rd, with Sean Tobin (Clonmel) 62nd in the men’s race, Kevin Dooney (Raheny) 105th.

“Everyone knows I love cross country,” said McCormack, the Kilcoole AC woman using the event as part of her build up to the famed Boston Marathon on April 15th, that distance likely to be her focus for Tokyo 2020, in what would be her fourth Olympics.

“I didn’t want to come here and not be competitive. I finished top 15 before, and a little disappointed not to get inside that again, but top 25, top 30, is always competitive. The organisers also built it up to be something brilliant and I think they pulled it off. The crowds out there were brilliant and the course was good.

“It felt longer than 10k but it was a good test, and it was good fun. It’s great to run a race where times don’t matter, and the World Cross Country is still a great event. Maybe some years not as much as others, but it’s great to be a part of it.”

Clearly not slowing down either since childbirth, McCormack already showing signs women often come back stronger as a result: “I was lucky in that there was nothing complicated about it, but I didn’t feel any different at all really. I was still nervous before the race, so I don’t think it’s changed me that much.”

Aarhus also marked her 37th Irish senior international cap - extending her record in athletics for an Irish woman, and bettered only by the all-time record of 45 caps held by javelin thrower Terry McHugh. The hope is McCormack will certainly be still running when the European Cross Country comes to Dublin in 2020, where another performance like this would bring high praise and reward.

Uganda’s Joshua Cheptegei won the senior men’s race, while the only other Irish representation was in the junior men’s race, with Darragh McElhinney (Bantry) finishing 53rd, and Jamie Battle (Mullingar Harriers) in 68th. It was tough out there.