Agnieszka Radwanska crashes out in rain at French Open 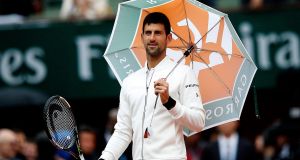 World number one Novak Djokovic uses an umbrella as he checks out the conditions at Roland Garros in Paris. Photograph: Yoan Valat/EPA

Fans spent more time looking at the murky Parisian sky then watching tennis yesterday as French Open organisers were accused of “not caring about the players” after the event was disrupted by more rain following the previous day’s washout.

Czech seventh seed Thomas Berdych summed up everyone’s frustration on a day when nine hours of play was lost by tweeting: “Hey @AustralianOpen can you send us one roof here to Paris?! You have 3 down there.”

World number ones Novak Djokovic – one set all against Spaniard Roberto Bautista Agut when play was finally suspended shortly before 7pm local time – and Serena Williams were among those still stranded in the fourth round.

World number two Radwanska and 2014 runner-up Halep, who both started their last-16 matches on Sunday, were forced to play in misty rain as organisers made a desperate attempt to clear a huge backlog.

“No one cares about the players in my opinion,” sixth seed Halep said after she was beaten 7-6 (0) 6-3 by Australian Sam Stosur in a battle of former finalists.

“It was impossible to play. To play tennis matches during the rain is a bit too much. I was close to getting injured with my back... but no one cares.”

Radwanska had been leading Bulgaria’s Tsvetana Pironkova 6-2 3-0 when rain halted play on Sunday. When the match resumed more than 40 hours later, the Polish second seed suffered a monumental meltdown as she lost 10 successive games in a 2-6 6-3 6-3 defeat by an opponent ranked 100 places below her.

Ernests Gulbis and David Goffin did get on court for their fourth round showdown but took matters into their own hands by marching back into the locker room even before organisers had a chance to make a call. It was a decision that Halep welcomed.

“Good. Well done to them,” the Romanian said as she gave them a thumbs-up.

Radwanska and Halep’s exit meant that at least five of the top eight women’s seeds failed to make their allotted quarter-final spots. Only two of 10 matches were completed as the event suffered a sixth day of rain showers.

1 Shock at golf clubs as sport faces shutdown in Level 5
2 Level 5 golf shutdown: Ireland one of few countries to close courses
3 GAA scrambling to deal with GPA demand for ‘baseline testing’ of all county panels
4 Philip Reid: Hard to find the sense in closing golf clubs
5 Dan Martin toasting another stage win at the Vuelta
Real news has value SUBSCRIBE