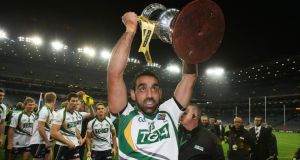 Aboriginal footballer and anti-racism campaigner Adam Goodes is contemplating retirement because of the jeering he has been subjected to over the last few months, Australian media reported on Wednesday.

The booing of the 35-year-old at AFL matches has become a touchstone for a debate about racist abuse aimed at indigenous people in the country.

The former Australian of the Year was jeered relentlessly by rival supporters during a match in Perth last weekend, prompting indigenous Sydney Swans team-mate Lewis Jetta to perform a war dance in front of the fans as an act of solidarity.

One spectator was ejected after being reported to security for shouting “Get back to the zoo!” at Goodes, an insult the fan later dismissed as “banter”.

Goodes, who has twice won the Brownlow Medal and captained Australia the last time they won the International Rules Series in 2010, had been given two days off training because of the incident and that was extended on Wednesday through this weekend’s match at home to Adelaide.

“Adam is sick and tired of this behaviour. It has been happening for too long and it has taken its toll,” Swans chief Andrew Ireland said. “We will give Adam all the time he needs.”

The Sydney Morning Herald reported on Wednesday that Goodes was considering not playing on until the end of a season he had already said would be his last, which the premier of the state of Victoria said would be a “tragedy”.

“I want to be very clear . . . People who are booing Adam Goodes, many of them are nothing more than racists,” Daniel Andrews told 3AW Radio.

“He is being booed by people – not all, but many of them – because they have no respect for him and no regard for him as an Aboriginal man and that is shameful.

“I am disgusted by that behaviour and it’s about time people stopped dancing around this and called it out for what it is. It’s racism, pure and simple.”

Senior officials at the AFL have also denounced the jeers but appear powerless to stop what has become a major embarrassment to the nation’s best-supported sport.

Judging by internet message boards and talk radio stations, however, many in Australia see no racial element to the booing and maintain it is provoked purely by antipathy to Goodes as an individual.

Others have never forgiven Goodes for identifying a 13-year-old girl in the crowd who called him an “ape” in 2013, leading to her ejection from the ground.

“He humiliated a 13-year-old girl who didn’t even know what she was saying, and the public haven’t forgotten it,” prominent radio host and former Australia rugby coach Alan Jones said on Channel 7 TV on Wednesday.

“Someone’s got to ask the question: why are they booing Adam Goodes and not the other 70 indigenous AFL players? Adam Goodes can fix this by changing his behaviour. He again today plays the victim.”

For others, however, the booing stems from Goodes’s refusal to accept racist abuse at his workplace.

“I hope the world takes notice of this . . . this (is) an Australian issue,” retired indigenous footballer Michael O’Loughlin told the Herald.

“To be called an Abo, a nigger, a black so-and-so, for your entire life, and then be expected to sit there and accept it, it’s a reflection on Australia and where we are as a country.

“Because someone like Adam doesn’t sit in the corner and accept it . . . he is booed.”