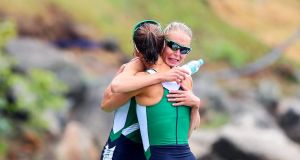 They have been the bright lights of these Irish Olympics and, on a memorable day on the water, our rowing crews reminded us of the slender, irretrievable margins.

Sinead Lynch and Claire Lambe rowed their hardest against the five fastest crews of the world and finished sixth in a time, eight seconds behind the gold-medal Dutch crew’s time of 7.04.73. They had nothing to berate themselves for – they were simply racing against faster and more experienced crews.

What a day though: Irish Olympic finals in any sport can be years or decades apart. In Lagoa, there was two in 15 minutes.

Lynch and Lambe had hardly made it out of their boat when the O’Donovan boys had finished silver and the Irish women were torn between their delight for their teammates and their own conflicted feelings. They will always be the first Irish woman’s crew to contest an Olympic final. And it’s not a bad way to mark your final race as a team.

“We did our best,” said Lynch. “We have no regrets...we had a good row. Maybe not the best start but if we hadn’t been beside the top five crews in the world we would have thought that was a brilliant start. We got into a really good rhythm and we tried really hard and we even sprinted at the end which we don’t normally get but we did that really well.”

They were up against it after the opening 200m, struggling to keep pace with the ferocious start of the Dutch and Canadian crews and putting in a lung-bursting effort through the third 500m in an attempt to force themselves back into contention.

“At the moment there is the disappointment at not reaching the final goal but I think in a couple of days we will look back at this with the best memories and be really proud,” said Lambe.

Lynch said: “What’s most disappointing is that it’s the end of our journey together.We have had 18 fabulous months.”

Of the rowing: you suspect the friendship has many Olympics ahead.

1 Gordon D’Arcy: There’s more to Saracens’ success than money
2 Seán Moran: More trouble as GAA votes one way and acts in another
3 Rowe and Dublin ready to get back down to business
4 Honeysuckle facing ‘different ball game’ in Irish Champion Hurdle
5 Solskjær can’t guarantee Rashford will play again this season
Real news has value SUBSCRIBE
Here is your handy guide to sport on television this week

Seán Moran: More trouble as GAA votes one way and acts in another 07:00
Rowe and Dublin ready to get back down to business 06:00
Gordon D’Arcy: There’s more to Saracens’ success than money 06:00
Honeysuckle facing ‘different ball game’ in Irish Champion Hurdle 01:03
Funding row just ‘background noise’ for Mayo’s Diarmuid O’Connor 01:00