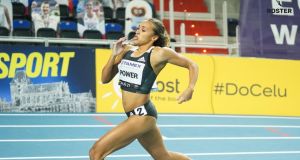 Nadia Power on her way to her Irish indoor 800 record in Poland on Wednesday. Photograph: Aleksandra Szmigiel

The name’s Power, Nadia Power. The track is my field, and my races preferably left shaken and stirred...

When she first started competing for Ireland some of her team-mates would jest in gentle envy that Nadia Power had one of the coolest surnames for an athlete. Especially in a race such as the 800 metres, one which demands the carefully sustained delivery of power over two laps of the track while still keeping some power in reserve for the finish of it. If only it was that simple.

No athletic potential can ever be dependent or judged on something as frivolous as your surname, or indeed the colour of your skin. Power got to understand all that early in her running career, that talent is nothing without hard work, identity is something to embrace, and every little bit of success is usually well earned and carefully planned and sometimes best pursued on your own terms. Keep all that in mind and stick to your own self beliefs and most people will judge you for exactly who and what you are.

For Power the latest evidence of all that came this week. Running at the World Indoor Tour in Torún, Poland on Wednesday evening, she fairly smashed her own Irish indoor 800m record by almost one-and-a-half seconds, clocking 2:00.98 in third place, the eighth fastest time anywhere in the world this year. Improving on the 2:02.44 she clocked in her first indoor race of the season in Vienna at the end of January, it was one of the biggest leaps in Irish records of recent times.

That sort of performance also brought more attention to her background, and in more ways than one: she’s always competed under her mother’s name, Sheila Power, who was born in Kilkenny, only is certainly no less tied to or influenced by her father, Abdullahi El-Tom, who was born in Sudan, moved to Ireland in 1990, and in September 2019 retired from his post as head of anthropology in Maynooth University, after 30 years working within the department and also known for his political activism outside of it.

Both her parents are fluent in Irish, and her mother also worked for many years in cross-cultural programmes and services for non-nationals visiting Ireland to work, train or study, so identity was never once a hidden word. That’s also why Power felt so comfortable standing up for the Black Lives Matter movement last summer, that feeling of want and need all coming from some of her own experiences growing up in Templeogue in south Dublin.

Being an only child also gave Power an added sense of independence, something which has stood to her through her rise up the athletics ranks, step by gentle step, and there’s an old familiar lesson in there in other ways too, that sometimes you’re better off trying to make it on your own.

It will be five years this summer since Power finished her Leaving Cert at St Mac Dara’s Community School, already with a string of Irish underage titles to her name. She’d played a few different sports growing up, and was also on the Dublin development camogie team, winning two underage Féile titles with St Jude’s, before pursuing her running talents alone.

As per Irish distance running tradition, that presented her with a few US scholarships, and she opted for the University of Virginia in Charlottesville, one as it turned out without any Irish tradition. After scoring highly in her Leaving Cert, she also gained entry into DCU, another option perhaps if the US route didn’t work out – which by the Christmas of her first year already seemed to be the case.

The one-size-fits-all, or rather high-mileage option, didn’t suit her, the first real breaking point being when she was told to come back two days early, having already booked her flight. Her scholarship was partly cut as a result, and although she lasted another two weeks, Power then booked a one-way flight home in January of 2017.

That took considerable single-mindedness, audacity, Power realising her running career would likely be stalled, or worse, had she stayed in America; on her return she reached out to Enda Fitzpatrick, a sub-four minute miler in his own racing prime, whose own daughter Eimear had raced against Power back in their underage years.

“From the moment we linked up, Nadia has been incredibly diligent and careful to do the right things and what is best for her running career,” says Fitzpatrick, who has worked with several Irish athletes over the years, including Linda Byrne, a 2012 Olympian in the marathon. What they also decided together was that sometimes success in this sport comes not because of any system that’s there but in spite of it.

Starting again in DCU, studying for a degree in Marketing, Innovation and Technology, the first big breakthrough came in the summer of 2019: Fitzpatrick soon suspected Power had a frame and engine more suited to 800m racing, and primed by hill sessions at St Enda’s Park and tuned by countless speed work at the Morton Stadium, Power won the bronze medal over 800m at the European Under-23 championships in Sweden. By the end of that summer she’d improved her 800m best to 2:02.39 and ran 4:13.93 for 1,500m, and suddenly the Tokyo Olympics seemed like a possible prospect.

What happened next both tested and tempered her determination to make Tokyo one year later. She didn’t miss a single training session during the first lockdown, and when Athletics Ireland refused her entry into her own National Championships last August, because she’d raced twice in green-listed country Finland earlier that month, under the assumption this wouldn’t impinge on her participation (Athletics Ireland were demanding a 14-day isolation), she responded a month later by running a new Irish under-23 record of 2:01.01 in Rovereto, Italy.

Roll on 2021: Power left home on January 3rd, warm-weather training in Portugal for three weeks, before beginning her racing schedule, travelling around Europe entirely alone, navigating the various barriers presented by Covid-19; so far this year she’s received no federation funding, spending some €1,000 of her own savings on Covid tests alone, essentially relying on her own high performance unit that she’s built around herself, such as Fitzpatrick, her strength and conditioning coach Donie Fox, physio Tom Lennon, the entire operation independent of Athletics Ireland.

When Power got back on Thursday night, home for the first time in seven weeks, she got word of an invitation to the World Indoor Tour final in Madrid next Wednesday, the ranking points on offer there almost certain to seal her qualification for Tokyo. Next stop after that will be the European Indoors, back in Torún a week later, her first senior championships remember, and come what may finds Power already successfully in control of her own running destiny.