Murphy joins Katie Taylor on list for Sportswoman of the Year 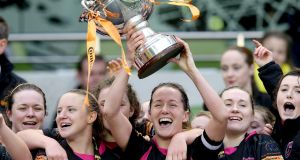 And so we have completed our list of contenders for the 2015 Sportswoman of the Year award, 14 names making the roll of honour, two of them – Katie Taylor and Madeline Perry – for the 10th time since we started out in 2004.

We also have five new monthly winners, the last of them Kylie Murphy who captained Wexford Youths through a memorable year, starting with their winning their first National League title in March. That earned them a place in the Champions League qualifying phase where they had an impressive debut, winning two out of three games, just losing out on a place in the knock-out phase.

In November, Murphy, from Graiguecullen, Co Carlow, raised the FAI Cup at the Aviva Stadium after beating Shelbourne in the final.

In a drama-packed game, Wexford were five minutes from defeat in normal time when Ciara Rossiter equalised. They were then five minutes from victory when Maria Delahunty volleyed them into a 2-1 lead in extra time before Shelbourne levelled.

Murphy joins four other first-time winners on the 2015 list: Ann Marie McGlynn, who captained the Irish senior women’s team to a bronze medal at the European Cross-Country Championships in Bulgaria; Sophie Spence, who starred in Ireland’s Six Nations success; Sarah Byrne, whose performances for the Irish basketball team at the Special Olympics helped them to a gold medal; and Noelle Lenihan who, at just 15, won silver in the discus at the Paralympic Athletics World Championships in Doha.

Our other winners have all been honoured before, with Leona Maguire and Briege Corkery collecting their fifth awards. Katie Walsh is the next most decorated, the Irish Grand National winner collecting her third award, while basketball’s Gráinne Dwyer, Irish rugby captain Niamh Briggs, canoeist Jenny Egan and dual GAA star Rena Buckley all won their second.

All that’s left to do is to whittle the 14 down to one, which is easier said than done.

1 Jack Nicklaus’ Trump endorsement leads to avalanche of dismay
2 Six Nations - France v Ireland: Kick-off time, TV details, permutations, team news and more
3 World Handicap System: What is it? How does it work? Will my handicap change?
4 Ireland, France or England? Who needs what to win the 2020 Six Nations
5 Return of Conor Murray’s box kicking could exploit French vulnerability
Real news has value SUBSCRIBE
Here is your handy guide to sport on television this week