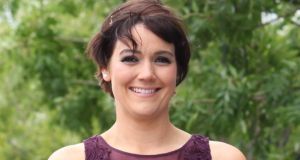 Gráinne McElwain: the TG4 woman gives it her best, year in, year out, her efforts bordering on the heroic, but she rarely gets anywhere. Photograph: Bryan Brophy/1IMAGE

Gráinne McElwain has her work cut out every September. First she has to try to get Cork manager Éamonn Ryan to concede that he’s half decent at his job, and then she has to persuade the Cork player of the match that her and her team’s achievements are a bit good. The TG4 woman gives it her best, year in, year out, her efforts bordering on the heroic, but she rarely gets anywhere.

Usually it’s a “yerra” from Ryan, and an “ah sure” from the player.

Take yesterday. She invited player of the match Briege Corkery to celebrate the fact that she and Rena Buckley had sealed themselves a whole chapter in the history of Irish sport by winning their 16th All-Ireland medals – six in camogie and, after their victory over Dublin, 10 in football.

“But it’s all about the team,” said Corkery, “individually we’d be nobody without them, and that’s what Cork camogie and football are all about. The team.”

McElwain smiled. Like 10 of Cork’s All-Ireland final opponents in the last 11 years, defeated.

It’s a trend. Ten years ago, Corkery won the Irish Times Sportswoman of the Year award, and nigh-on passed out when her name was announced. It never entered her head that she was even a contender. Such was the lot of our greatest Gaelic Games sportswomen, recognition was a stranger.

Last year, she and her footballing colleagues reacted in much the same way when they were voted RTÉ’s Team of the Year by the public, seeing off the likes of the Irish rugby lads, the Kilkenny hurlers and the Kerry footballers. If it was a panel of “experts” they’d most likely have finished behind the Irish baton twirling team, but this was the public making its voice heard. And it was a very lovely thing.

If it wasn’t for TG4, we’d hardly know this extraordinary Cork team existed; the channel has been an outstanding promoter of women’s Gaelic football, not just on glory days like yesterday, but all through the club and county seasons.

In time, hopefully we’ll stop celebrating just the 50,000 empty seats. Inch by inch, though, it’s getting better. Three years ago the attendance was 16,998, so close to double that is progress.

It wasn’t quite total Gaelic football, the defensive strategies of both counties working a treat, neither scoring a goal when goalscoring is their second nature.

Come cup-collecting time, Cork captain Ciara O’Sullivan, with just the three sisters on the panel (the Da must be worn out from washing kits), apologised to the faithful. “I know we’re in the habit of giving ye a heart attack, but believe me it’s no easier on the pitch,” she said.

True enough, four of their 10 triumphs in the last 11 years have been by a point, another by just two, and last year, of course, they had to extricate themselves from a rather tricky situation when they found themselves 10 points down to Dublin with 15 minutes to go.

McElwain: “You’re not going to leave?”

Ryan [chuckling]: “Ah, that took a lot out of us, there aren’t too many miles left on the clock.”

Translated: See ya next year.

And then Ryan had a quick word with Enda Kenny, possibly about the challenge of completing a two-in-a-row, and then he was off to the dressing room to have a chat with his history-makers.

He took the job in 2004 when they’d never won an All-Ireland. Since then? They don’t know how to stop collecting them.