Richie Benaud knew the value of being economical with his words 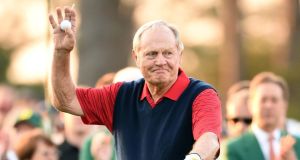 With all the hi-tech wizardry on view at the Masters, Grand National and even the Boat Race over the last week, those old clips they kept playing in tribute to the late, great and very marvellous Richie Benaud looked a touch grainy and archaic. And divil a Snickometer in sight. But all the wizardry Benaud needed back in the day was a microphone and a bit of cricket, nothing more. There were few better.

Rory Bremner turned up on Channel Four News to talk about the man whom he impersonated rather well; indeed Benaud, he said last week, once walked up behind him when he was impersonating him and demanded royalties.

He recalled some of his finer quips, among them – and you could hear the dryness in Benaud’s voice – “Glenn McGrath dismissed for two . . . just 98 short of his century.”

It was hard not to think of Richie yesterday when Jack Nicklaus joined Ewen Murray in the Sky Sports commentary box for the start of the final day of the Masters.

Now, Jack inspires such devotion, because by all accounts he was useful at this golf business, that you’d risk losing friends by being tetchy about his telly work. But if Jordan Spieth took as few putts as Jack did breaths, he’d have been 36 under after round one.

Come Friday night, McGinley had a hunch the tournament was done and dusted, so far over the horizon had Jordan disappeared, which left Monty Montgomerie having to step in, in a more-senior-Ryder- Cup-captain-who-has-been-employed-longer-by-Sky-Sports kind of way, to tell the viewers that it was FAR from over and therefore they should most definitely stay tuned.

Our host David Livingstone appreciated that very much, almost as much as Nike did yesterday’s pairings. “Tiger and Rory? Wooooooot!” The Sky panel, though, worried that only one man and a dog would follow the other pairings, Tiger and Rory’s adherents resembling the Million Man March, the dog possibly even deserting Phil Mickelson & Charley Hoffman and Jordan & Rose for a glimpse of the Nike boys.

Jack had lots to say about that. Lots.

Speaking of sport on today’s telly. Gok Wan. And the Grand National. What are ya like, Channel Four?

Rummaging You tune in to see horsies doing their Aintree thing, and instead you get Gok rummaging through Chanelle McCoy’s wardrobes, AP’s other half making Imelda Marcos look frugal in the shoe department.

And then AP got home and Gok interrogated him about his fashion choices, which probably came as a relief to the useful jockey, a break from the 65,928 questions on his feelings about retirement.

Still, if Peter O’Sullevan, the Richie Benaud of horse racing, was watching (heavens, he’s 97 now), you’d imagine he was, as the young people put it, asking: WTF?

Peter might be tempted to echo Richie’s words: “Time to say goodbye, thank you for having me.”