Many hurdles before a company is authorised to resell Olympic tickets 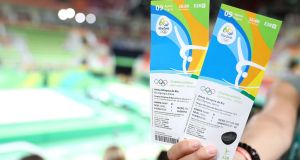 A spectator shows their tickets for gymnastics at the Rio Olympic Arena. Photograph: Martin Rickett/PA Wire

As stated earlier this week by Pat Hickey, no tickets for the Rio Olympics would have passed through the hands of the Olympic Council of Ireland (OCI).

Mr Hickey, the president of the OCI, was speaking during the controversy over how tickets allegedly from the council’s allocation ended up in the hotel room where an Irish man, Kevin Mallon, was arrested by Brazilian police last week.

Mr Mallon is the Dublin finance director of British company THG Sports, which is not authorised to sell tickets for the games in Rio.

The route the tickets should take before reaching the hands of sport fans is mapped out by regulations laid down by the International Olympic Committee (IOC), based in Switzerland.

The tickets themselves are printed by a local organising committee tasked by the IOC with hosting the Games.

Swaths of empty seating have forced organisers to bus in schoolchildren from poor communities to try to create the full venues that television rights-holders prefer.

Tickets going outside Brazil are allocated to countries based on a formula that includes population size and sporting prowess in the individual disciplines that make up the games.

Before these are distributed, each national Olympic committee must nominate an Authorised Ticket Reseller (ATR), a company that will act as its ticketing agent, selling on its allocation at an agreed mark-up.

The Irish Times is seeking clarification from the local organising committee in Rio and the IOC in Switzerland on how Authorised Ticket Resellers are selected.

One executive with an ATR involved in the Rio Olympics, speaking on condition of anonymity, said the process typically takes two-three years to complete.

An interested company must submit a formal application that proves its capacity to carry out the role.

This application goes to a review committee, described as reporting to both the IOC and the local organising committee.

This committee decides which companies will be approved as ATRs.

Crucially, each ATR applicant must be put forward by a national Olympic committee, according to the executive interviewed.

Some committees tender for companies to apply. Others do not.