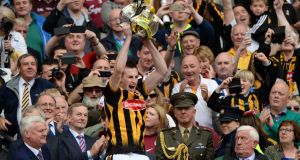 With just two teams left in this year’s All-Ireland senior hurling and football championships, the fate of Liam and Sam is almost decided. Regardless of where these coveted cups finally rest, one thing is certain, 2016 will not add any new winning counties into either competition’s Roll of Honour. With a small number of teams dominating both competitions in recent years, it is easy to forget that underlying the modern era are 128 seasons (the 1888 All-Ireland final was never completed) and 24 different All-Ireland winners (Map 1).

Throughout the history of the All-Ireland series these various winners have created a unique historical geography of GAA success and, equally, failure for those counties that have yet to achieve a coveted senior inter-county title.

Nine of the 32counties (or ten of all 34 participating counties including New York and London) have yet to win an All-Ireland in either code, yet eight counties have managed to win titles in both.

Kerry’s one hurling title in 1891 places it top of the leader board across both codes, just one ahead of Cork. A Kilkenny win this Sunday would bring it into joint second, solely from hurling success. Only one of the two “outside” counties has succeeded in achieving a victory –- London won a senior All-Ireland hurling title in 1901.

Examining the geography of counties that have yet to win, it would be easy to correlate small populations with a lack of success. With the exceptions of Antrim (which suffers a double population divide in terms of politics and within the GAA between hurling and football), Wicklow (internally divided by its mountains) and Westmeath, the other six counties all lie at the bottom of the population league table. Of the smallest seven counties by population: Leitrim, Longford, Carlow, Monaghan, Fermanagh, Roscommon and Sligo, only Roscommon have tasted All-Ireland victory.

However, population is not the only factor in determining success. If it was, Dublin would top both honours tables and neither Kerry nor Kilkenny would have achieved their current state of prominence.

Rather, a complex combination of factors are frequently listed including the role of tradition, emigration, the prevalence of other sports, the quality of facilities and availability of funding, underage structures, a commitment to one particular sport, strength of club competition, a supportive county board and good management structures.

And of course the ever-present concern over the structure of the championships themselves.

In mapping success in each championship separately a more instructive geography emerges which highlights two other key factors. The first of these is the vital role played by strong local rivalries – or the neighbourhood effect.

While we are almost instinctively aware that hurling is strongest in a heartland area south of a line that runs from north Galway to south Meath, mapping All-Ireland success highlights just how ingrained this area is and always has been.

From Tipperary’s early success, hurling titles spread outwards to neighbouring counties, with its final bordering county, Offaly, the most recent one to achieve a first All-Ireland title, albeit back in 1981.

What we are less aware of is the fact that this hurling heartland was also the core of the early GAA for both codes. While two caveats must be placed on any analysis of these formative years on the basis of All-Ireland success – the fact that All-Ireland titles were initially contested by club teams on behalf of their counties and the fact that the county administrative structure grew sporadically and organically in the early years – it was still 1923 and 1925 before Galway brought a hurling title and football title respectively out of the Leinster/Munster core, across the border into Connacht. 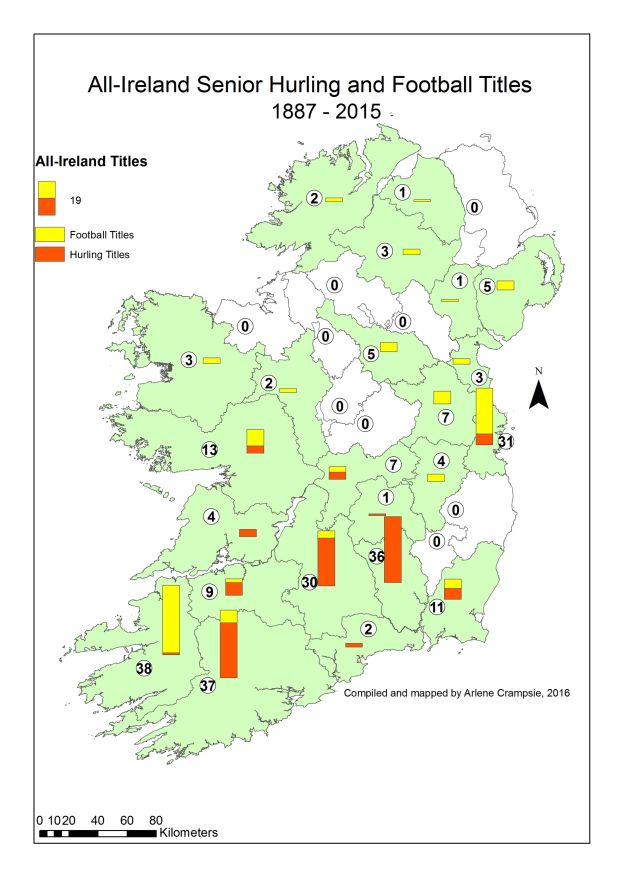 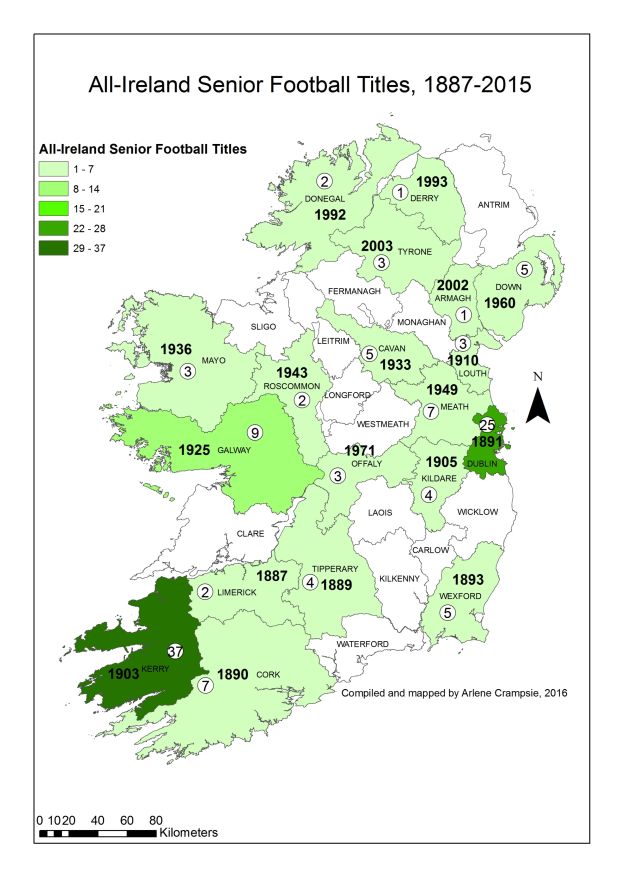 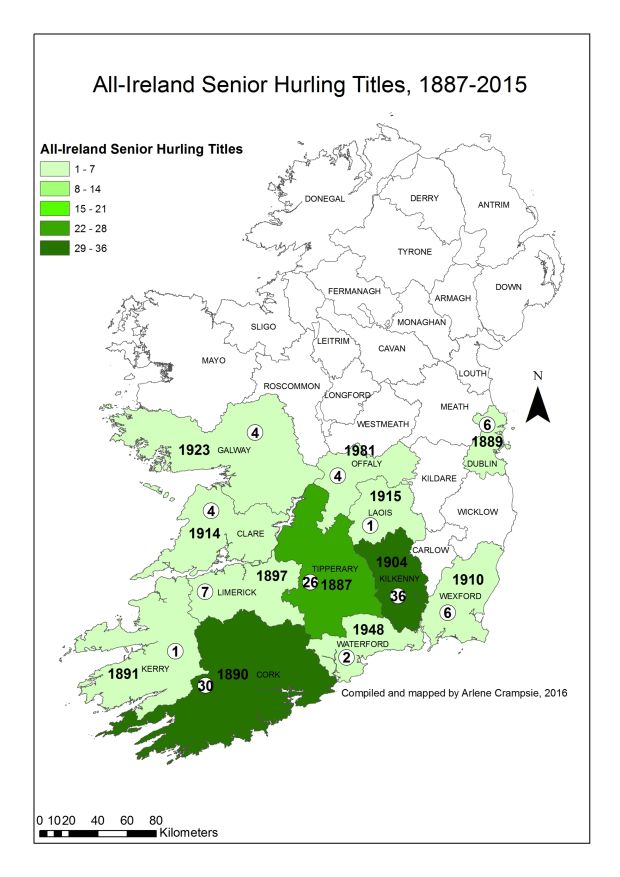 Ulster had to wait until 1933 before achieving a football title and it remains the only province awaiting a hurling title.

Thus, despite the GAA’s early success in spreading across Ireland, it is clear that national success was much more geographically limited.

In terms of football, the map is much more diverse and split almost in two by a zone of counties that have yet to win an All-Ireland, evident in a diagonal through the midlands from Sligo southeast to Waterford, broken only by Offaly.

Wexford remains as an island in the southeast, although given that their last football title was in 1918 completing their four in a row, it could be argued the diagonal gap identified along the banks of the Shannon expands outwards at both ends, northwest and southeast.

Is it a coincidence most of these counties lie at the intersection of provincial boundaries, where local rivalries along at least one border are not developed to their full strength through frequent inter-county championship games?

Or can this distinctive pattern be simply blamed on the aforementioned low populations and high emigration?

Certainly Offaly’s success in both codes has often been attributed to the impact of Bord na Móna in not simply arresting emigration, but actively encouraging inward migration to the county. Indeed inward migration has historically also been key for Dublin’s success in both codes with many Dublin clubs owing their origins to migrants from other counties.

The second factor, illuminated by these maps, is for want of a better phrase “timing”. This is not to take away from the skill and effort required to win any All-Ireland title, but what both maps clearly illustrate is that new teams have an opportunity to break through in key periods when dominant teams are on the wane after a run of success.

Many of these new teams have often spent years knocking on the door, while for others it is the magic combination of charismatic management and a group of talented players who peak at a crucial moment.

Thus, Galway won their first football All-Ireland in 1925 after a decade dominated by Wexford and Dublin, while Cavan’s first title was claimed after Kerry had won five out of the previous seven championships. In hurling both Clare and Laois achieved their first titles in 1914 and 1915 after a decade where Kilkenny claimed seven titles.

These periods also see a much wider range of championship winners. From 1942 to 1952 the All-Ireland football title changed hands seven times between Dublin, Roscommon, Cork, Kerry, Cavan, Meath and Mayo; while in hurling between 1991 and 2001 Tipperary, Kilkenny, Offaly, Clare, Wexford and Cork all shared All-Ireland honours.

Ulster’s emergence as a dominant force in the early 1990s after Dublin and Kerry dominated the 70s and much of the 80s, can at least partially be explained by the above factors of timing and neighbouring rivalries/successes. However, the evolving political situation in Ulster must also be considered. While Cavan appeared on the football roll of honour as early as 1933, it was 1960 before a second county, Down, claimed an All-Ireland title.

It might have been expected Down’s three titles in the 1960s would herald the awakening of Ulster, but these hopes were stunted by the outbreak of the Troubles in Northern Ireland. Thus, it was the 1990s before an Ulster era finally dawned with four All-Irelands returning to the province in 1991, 1992, 1993 and 1994 courtesy of Down (2), Donegal and Derry. This success spread to Armagh in 2002 with Tyrone following suit in 2003, 2005 and 2008.

This all begs the question – are we likely to see new counties arriving on either roll of honour in the future? Certainly the current hurling championship structure makes it unlikely. Only Carlow and Westmeath among the All-Ireland contenders have yet to win a title and it is now 35 years since a new county has won.

Yet, Offaly in 1981 were the first new county to win a hurling title since Waterford in 1948, a gap of 33 years. The football championship structure is more open to the perfect combination of factors allowing a new team the room to succeed. In recent years Westmeath and Monaghan have been in contention and with Clare’s arrival in the final eight this year, there are at least three teams who have yet to win that are knocking on the proverbial door.

However none of these possibilities will alter the overall map of dominant counties in either code.

On Sunday Kilkenny will attempt to re-emphasise their position as kings of modern hurling – a crown they only wrested from Cork as recently as 2008.

As the maps shows, Tipperary, Cork and Kilkenny have contested the coveted top of the hurling roll of honour since the early decades of the 20th century.

The 1993 All-Ireland title saw Kilkenny move ahead of Tipperary and they have consolidated their dominance in recent years. A win for Tipperary on Sunday will not change the league table, but it will close the gap among the top three once more.

Dr Arlene Crampsie lectures in the School of Geography, UCD

You can view animated versions of the maps seen above on the UCD Geography School's facebook page, accessible HERE.