Ken Early: Manchester United a victim of their own financial might

Manchester United have introduced their new home jersey in Shanghai, China during the ICC tournament. Its part of a £750 million contract agreed with Adidas to replace Nike as sponsor of the club for a decade, a record kit deal for the sport. 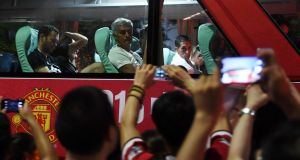 Manchester United coach Jose Mourinho in Beijing. He is in no mood to go along with the fiction that the pre-season games mean anything. Photograph: Greg Baker/AFP/

Today Manchester United and Manchester City face each other at Beijing’s Bird’s Nest Stadium in the first match of the Mourinho-Guardiola era.

The match is part of the International Champions Cup series, the money-spinning pre-season tournament which is currently being played out around the world at venues in the US, Europe (including Dublin and Limerick), China and Australia.

“Matches like Bayern Munich and Real Madrid at MetLife Stadium and Chelsea vs. Liverpool at Rose Bowl Stadium demonstrates the elite competition the ICC stands for,” said Charlie Stillitano, chairman of the tournament organisers, Relevent Sports.

Of course, the ICC doesn’t stand for elite competition, but rather for an evolution in marketing. Football clubs that used to organise their own pre-season tours to developing markets now believe they can make more money, and incur less hassle, by participating together in a so-called “tournament”.

Relevent Sports would like everyone to go along with the fiction that these games actually mean something. Unfortunately for the organisers, Jose Mourinho is in no mood to play along. Speaking yesterday in smoggy, sweltering Beijing, Mourinho delivered a withering assessment of his Chinese experience so far. Asked whether he thought Beijing might be a luckier hunting ground for his team than Shanghai, where United had lost 4-1 to Borussia Dortmund, Mourinho replied: “I think Beijing is also unlucky because the pitch is very bad... It is not a problem for me to lose matches in pre-season, it is a problem for me when there are bad conditions for my players to train and bad conditions to play. If you ask me my objective for the match tomorrow [against Manchester City], I have only one, to take the players home safe without any injury.

“These are no conditions to play a good game of football, but we have to play. If it was a friendly, it becomes a double friendly. No injuries, play safe, go home, keep the preparation next week.

United’s marketing department might wish Mourinho would try a little harder to disguise his contempt for the lucrative pre-season schedule, but the coach is entitled to make the point that this sort of preparation makes more sense from the financial than the athletic perspective.

Indeed United are making so much money from the new TV deal and their increasing sponsorship portfolio that you wonder whether these tours are still justified by the financial gains. Might they have reached the point where their pre-season priority should be getting their players in the best possible physical condition? You still get paid more to play in the Champions League than the International Champions Cup, after all.

Maybe Mourinho will lighten up if United manage to bring the long pursuit of Paul Pogba to a successful conclusion. While he and his players have been out in China growing the brand, the Weimar-style negotiations with Juventus over Pogba illustrate the diminishing marginal utility of cash in the world of top-level football. The more money United make, the more it costs to get the players they want.

It still looks as though Pogba will rejoin the club he left four years ago for a world record fee of between £90 and £100 million. The ever-optimistic Paul Scholes has already gone on record as saying that Pogba isn’t worth it. Scholes’ logic seemed to be that Pogba is not as good as Cristiano Ronaldo, who joined Real Madrid in 2009 for £82 million. But United’s turnover in 2009 was scarcely half what it is now.

United’s projected turnover for 2016 is £510 million. That means that even if Pogba ended up costing £100 million, he would still not be the most expensive player in their history, measured by the player’s fee as a proportion of the club’s turnover at the time of the transfer.

By this measure, United’s most expensive signing is still Juan Veron, whose £28.1m transfer fee in 2001 represented almost 22 per cent of the club’s then-turnover of £129 million. As a percentage of turnover a £100 million Pogba would rank as only the third-most expensive United signing, behind Rio Ferdinand and ahead of Wayne Rooney and Roy Keane.

The Real Madrid chairman, Florentino Perez, argues that “the most expensive players are the cheapest”. The logic is that paying a top price for a top player is ultimately more economical than paying medium prices for mediocre players.

In United’s case Ferdinand, Rooney and Keane all worked out pretty well, but Veron demonstrates that a big fee is no guarantee of a big success. United at least managed to sell Veron to Chelsea and recover half of what they paid for him, and Pogba, who is still only 23, could likewise be flipped even if he flopped. The supply of money in football is still growing faster than the supply of talent.

Pogba has all the physical and technical makings of greatness, plus the star quality that United increasingly prize above mere footballing attributes.

And Mourinho’s criticism of the pre-season tour will have reminded United’s directors that if they can’t complete this signing, they will have to deal with a manager who will be wondering why he has to spend pre-season traipsing around China when the club can’t even use the extra money to get the players he’s asked for. When you look at it that way, it’s not really a question of whether they can afford to sign Pogba. It’s a question of whether they can afford not to.

1 Andy Farrell looking forward to some selection headaches come the Six Nations
2 Jackie Tyrrell: Waterford have a free pass but Cody just doesn't lose semi-finals
3 Johnny Watterson: Flaws of sporting gods make them just like us
4 Maradona’s terrible, terminal journey from human to myth divided him in two
5 The day a 20-year-old Maradona led a League of Ireland XI a merry dance
Real news has value SUBSCRIBE
Here is your handy guide to sport on television this week

Neil Lennon insists he is the man to turn it around for Celtic 08:58
Billy Burns named at 10 to face Georgia; Errors cost Dundalk against Rapid Vienna 08:00
Andy Farrell looking forward to some selection headaches come the Six Nations 06:00
The day a 20-year-old Maradona led a League of Ireland XI a merry dance 06:00
Johnny Watterson: Flaws of sporting gods make them just like us 06:00