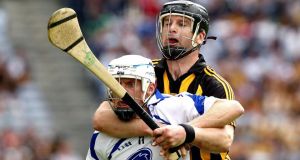 Kilkenny’s JJ Delaney was one of the greatest defenders in the history of the game. Here he keeps a close hold on Waterford’s Stephen Molumphy. Photography: James Crombie/Inpho

It is a moment that matters now nowhere other than deep in the souls of Galway hurling people, in particular those thousands sitting in the tiers of the Hogan Stand in September 2012.

The opening 20 minutes of the All-Ireland final and the Westerners, who had already devastated Kilkenny in that year’s provincial showpiece, were in the mood.

Joe Canning had made an early declaration of intent that this would not be another blue September for Galway by firing one of the supreme All-Ireland hurling final goals. Riding the wave of emotion generated by that moment, the maroon men had looked irresistible. They looked like the best hurling team in Ireland by a country distance.

And then Canning had the ball close to the touch line and he was sizing up his options. JJ Delaney had the thankless task of shadowing him, diligent but crouched in his familiar stance but as rattled as every other Kilkenny man on the field appeared to be.

Canning seemed to dwarf every other hurler on the field during that period. He owned the game. And the Portumna prodigy turned Delaney, one of the best fullbacks the game has seen, one way and then another and he leaned back to stroke a point that was nonchalant and imperious. The murmur of acclamation began to rise as soon as the ball left his hurl and as it travelled the entire power shift was dazzlingly clear: after the decades of tragic-comic disappointment for Galway, they would finally not just win their All-Ireland but win it by giving an exhibition against the county that had redefined the game.

And for the seconds it took the ball to reach the posts, it appeared that Kilkenny had aged and withered in an instant. Except the shot drifted narrowly across the face of the posts and went wide.

So it proved. Kilkenny rescued that year’s All-Ireland following a replay. And after spending the summer of winter of 2013 smarting and planning their recovery from a pale title defence, they were back this year.

The abiding memory of their extraordinary two-match duel with Tipperary may well be Delaney’s goal-saving hook on Séamus Callanan, a defensive play which combined absolute physical commitment and athleticism with sublime precision and skill.

The announcement of his retirement Friday morning means the Nowlan Park dressing room will be down five of its most seasoned players whenever they reconvene. It is a staggering number and the instinctive reaction is to predict that even Kilkenny cannot absorb such a dramatic loss of experience: that the absences are bound to leave them vulnerable.

Don’t believe it. Whenever the Kilkenny hurlers and Cody are asked about the nature of their success, they resort to automatic praise of the panel. Nobody really wants to hear it because it doesn’t reveal anything about the internal tensions or about Cody’s extraordinary ability to instil in players the idea that enough is never enough: that if you have six Celtic Crosses, the seventh will be a sweeter moment still. Everybody wants to know about that insatiable, frightening, competitive zeal Cody’s teams play with. And they bang on about the panel.

But they don’t just talk about it. They live it. Tommy Walsh and Brian Hogan spent last year’s championship as peripheral figures and both stepped away this autumn. David Herity and Aidan Fogarty surveyed the scene and also came to the conclusion that their day was done.

On a radio interview with Newstalk, Hogan spoke amusingly about the brevity and formality of his conversation with Brian Cody when he phoned to say that he was done. There was no sentimental speech, no histrionics and certainly no going on the beer together to talk about the good days.

Cody must have been a key influence on Hogan for most of his adult life – and certainly the voice whose authority was absolute – and yet when it was over, he spoke about his hurling boss as though he was still a mystery to him. From the first minute, Cody made it clear that he wasn’t interested in being a friend to the players. That isn’t going to change now.

Delaney has been such an immense figure in hurling over the past decade that his absence will be keenly felt around Nowlan Park when the next rising begins. His remarks on Kilkenny’s website were in keeping with the theme favoured by departing Kilkenny players – expressions of gratitude and thanks, formal and good mannered and modest, never a moment of self-indulgence or score-settling.

But last September’s All-Ireland was achieved without the Ballyhale man playing a key role and his reduced minutes were the most vivid proof that Kilkenny mean it when they say the panel is all: that you are expected to accept your lot and without complaint, even if you happen to be the most decorated championship player in the game.

If last summer was defined by Cody’s liberal recalibration of his team between league and championship, between All-Ireland final and replay, then the season ahead is now alive with fresh possibilities and intrigues.

How will Jackie Tyrell and Paul Murphy and company respond to the reality that JJ is no longer there anymore to fulfil the role of understated, super heroic custodian of the virtues that distinguished Kilkenny? What will the younger players do with the fact that five panel places that weren’t there last year and are now up for grabs? And how will Cody warm to the task of filling in the absences and voids?

It was fine for the Kilkenny hurlers to stand in Nowlan Park when Bruce Springsteen played there last summer and hear the crowd belt out the chorus of Glory Days. But it is not what they believe in. Delaney did his best, did his bit and then- puff – he was gone. His best was wonderful but that wasn’t the point. He may have left the Kilkenny panel, but in January the Kilkenny panel will be full, all eyes on the road ahead.

They might just be up for the Walsh Cup.