American Letter: In the NFL, almost four out of five players will be in severe financial distress just two years after hanging up their helmets 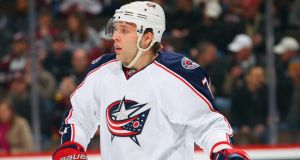 Jack Johnson in acton for the Columbus Blue Jackets. When he filed bankruptcy papers the balance in his current account was $2,202.62. Photograph: Getty Images

Not yet halfway through that deal, Johnson, now a Columbus Blue Jacket, has declared bankruptcy. With outstanding debts estimated to be between $10 million and $15 million, and assets worth just $50,000, the day he filed papers in an Ohio court the balance in his current account was $2,202.62.

Even more startling than those stark numbers was the revelation his now estranged parents had been responsible for handling his finances. At the same time Johnson was becoming the latest cautionary tale about athletes prematurely losing fortunes, the Philadelphia Phillies’ Ryan Howard made an undisclosed out-of-court settlement to end tawdry lawsuits involving the slugger and his family.

Howard’s parents Ron and Cheryl, who counted BMWs, Aston Martins and Mercedes among the cars he gifted them, were suing for $5 million compensation each to walk away from the job of looking after his affairs. His twin brother Corey who earned $92 an hour on Howard’s payroll sought $2.8 million for his work as a consultant to the star.

Drawing down $25 million a year with the Phillies, Howard was prompted to disentangle his family from his finances when he watched a 2012 ESPN documentary called Broke about athletes who went bankrupt, many because they’d charged those closest to them with managing their new-found wealth.

In a lot of cases, the players involved admitted they were often too lazy and/or disinterested to ever bother reading business documents they were given to sign by those they trusted. Recognising he had been doing just that for years, Howard took action.

“I’d say I picked the wrong people who led me down the wrong path,” said Johnson last week. “I’ve got people in place who are going to fix everything now. It’s something I should have done a long time ago.”

Every major sport in America tries to educate incoming rookies about the need to be smarter about money and more diligent about the people they trust with it. Mendicant former players are even wheeled in to relate poignant tales of financial woe. Unfortunately, it’s a lesson too many athletes can only learn the hard way.

According to a Sports Illustrated investigation, 60 per cent of NBA players are broke within five years of retiring. In the NFL, almost four out of five players will be in severe financial distress just two years after hanging up their helmets.

The reasons why are manifold. Too much money is handed to them too young and they develop spendthrift habits that, given the brevity of their careers, presage future disaster. Reared to be wary of strangers on the make, too many, like Howard, entrust family and friends with financial management roles despite them having no experience in that area. Always conscious of how fortunate they are, athletes are also traditionally soft touches for less well-off relatives and pals seeking loans to start “dream” businesses.

“I got into basketball when I was 19 years old,” wrote Antoine Walker, a former NBA star whose descent into bankruptcy is chronicled in a forthcoming documentary. “Why would I think about retirement or savings or any of that stuff at that age? Now I know. You need to educate yourself, because your career goes fast. I’m 38 years old, still a young man, with a lot of life left to live. Most athletes’ career will likely end in their 30s. Just think of the decades you need to account for after that. Money comes fast but it can go in an instant.”

Too few of those seeking to replicate those feats bother to find out Johnson spent a lot of time picking the brains of successful businessmen and entrepreneurs before he ever started making large-scale investments.

In the same vein, LeBron James has developed relationships with Warren Buffet and John W Henry’s Fenway Sports Group with an eye on parlaying his fame and fortune into something more enduring.

The bankrupt pro athlete has become such an archetype in American sports of late though that several business schools have started to run MBA programmes specifically tailored to the needs of high-earning players. Many of those who enrol in these classes went to prestigious universities as undergraduates but the wattage of their celebrity and size of their talent often ensured they were allowed to neglect their education. Of course, the irony is if they had paid more attention then, they might not be broke now.

1 Gerry Thornley: Antoine Dupont and France look perfectly primed for Ireland visit
2 Ireland's centre will hold thanks to Henshaw and Aki’s midfield muscle memory
3 Rory McIlroy’s sole focus is on Masters and another Grand Slam opportunity
4 Seán O’Brien: Anger over my parents’ break-up never left me
5 France’s Teddy Thomas ruled out of Ireland clash
Real news has value SUBSCRIBE
Here is your handy guide to sport on television this week