US Masters: Jordan Spieth upstages his elders on first round

Rory McIlroy shoots a 71, one-under, his ninth straight sub-par round in Majors 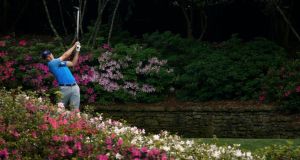 Jordan Spieth of the US hits off the 13th tee during first round play of the Masters golf tournament at Augusta yesterday. Photograph: Jim Young/Reuters

Those golfing sages who insist this sacred golfing ground is one for the experienced, the old and the wise, have been put in their place. Jordan Spieth, at 21 years of age, doesn’t push or shove or stand out for any reason other than he is unbelievably, darn good at this game; and, as this 79th edition of the US Masters commenced its search for its newest champion, it was the young Texan who upstaged all others.

On a beautifully sunny day, with only a gentle breeze swirling through the towering cathedral pines, Spieth became the youngest 18 holes leader of the revered tournament. In shooting an opening round of 64, eight-under par, Spieth usurped none other than Rory McIlroy who previously held the distinction. The Texan is younger by three months than McIlroy was when he led after the first round in 2011.

As if reserving the best drama until the biggest stage, Spieth – beaten in a play-off for the Houston Open on Sunday – continued his hot streak and closed with a 12-footer for birdie on the 18th, the hardest hole of the first round, to open a gap on his pursuers.

Spieth led by three from a four-man group that featured Justin Rose, Charley Hoffman, Ernie Els and Justin Day, who had a run of five successive birdies from the 13th on his run home.

And, yet, it remains all to play for. Very much so.

‘So much can happen’

For some, like Spieth, this first round was about demonstrating flair and a mindset beyond his young years. For others, it was about grinding and staying in the game.

Tiger Woods was one of those grinders. Woods, who took a hiatus for two months due to poor form and the pitching yips, returned to tournament duty: lo and behold, the maestro’s short game magic was back, it was other elements of his game – mainly his driving – which deserted him. Still, he kept to the task and shot a 73.

“It was a good day, I made only two dumb mistakes,” said Woods, referring to his play of the ninth where he pulled his drive on to the first tee and then hit his approach into trees.

So, too, McIlroy grinded. The man with a career Grand Slam on his mind showed his own resolve to overcome some poor chipping to open with a 71. “Look, I obviously know what I can achieve this week but I’m not letting myself think about it, just trying to play it one round at a time,” he said. “I feel like I can do better.”

Nobody wins a tournament, least of all a Major, in the first round. But McIlroy, like the others, knows that it can be lost on a Thursday. And Bubba Watson, the defending champion, was another who signed for a 71 that had him believing the glass was half-full rather than half-empty. Watson had two three-putts in his round, and was “tired” by the finish. That’s what defending titles can do to a player.

For Pádraig Harrington, who had a 72, there was the frustration of dropping two shots late on in his round. The three-time Major champion suffered back-to-back bogeys on the 16th and 17th holes which he described as “disappointing.” He added: “I feel like I’ve given up two or three shots (to the field) today, I need to do nicely over the next three days.” The Dubliner will especially look to see an improvement on the greens.

Shane Lowry was moving nicely until a bogey-double bogey start to the back nine derailed him. He was bunkered on the 10th and then tried to carve a rescue club around overhanging trees on the 11th and pulled his approach into the water. A couple of birdies coming in enabled the Offaly man to sign for a 75, but of his “rollercoaster round” he admitted: “My goal now is to make the cut and get four rounds around here.” He has targeted a second round 69 if he is to achieve that aim.

With a three stroke lead, Spieth – who was runner-up to Watson on his debut here last year – has again shown a remarkable affinity with this hallowed course. His round included nine birdies, one of which came on the 14th, where his approach hit the flag-stick, and his sole bogey came on the Par 5 15th when, between clubs, he overshot the green. It was one, small indiscretion on a day when virtually everything else went right for the Texan.