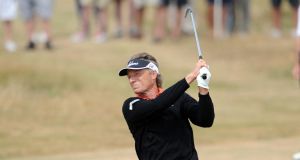 Tom Watson, Colin Montgomerie and Tony Jacklin have called for the 56-year-old Bernhard Langer to be considered for Ryder Cup selection after his emphatic 13-stroke victory in the Senior British Open at the weekend.

British bookmakers Ladbrokes rate the German veteran a 20-1 shot to be chosen by European captain Paul McGinley for the biennial match against US at Gleneagles in Scotland in September.

If Langer is picked he would become the oldest player in the history of the competition, surpassing American Ray Floyd who was 51 when he appeared in the team event in 1993.

“I’d certainly be saying to Paul that this guy is playing so well he might be worth a pick,” US Ryder Cup skipper Watson told reporters. “The way he is hitting it just now Gleneagles is a course that could be played by Bernhard.”

Former European Ryder Cup captain Montgomerie, who finished a distant second on Sunday, said world number two and new British Open champion Rory McIlroy would have found it tough to keep up with Langer at Porthcawl. “Bernhard Langer’s performance is one of the golfing performances of all time,” said eight-times European number one Montgomerie of the German’s 18-under-par effort on the Welsh links.

The margin of victory was the second biggest in the history of senior major championships. Selection for the 12-man European Ryder Cup team will be made up of nine automatic qualifiers and three wildcard picks.

“We’ve been talking about it for a number of years now because I’ve been playing some really good golf the last six or seven years,” Langer said. “But I’m not sure I’m on the radar screen of Paul McGinley. “It’s up to the captain. I certainly feel my golf is worthy of playing in the Ryder Cup.”

Jacklin, Europe’s most successful captain of all time, said he would be considering Langer for a wildcard pick if he was in charge. “Bernhard’s a great team man...and I’d be thinking very seriously indeed if I was Paul McGinley because even if the young guys had been here they wouldn’t have beaten his score,” said Jacklin.”

1 Tottenham players reminded of responsibilities over public workouts
2 My favourite sporting moment: When Manchester United reached the promised land
3 War, murder and an incorrect scorecard: The story of the 1968 US Masters
4 Conor McDonald: ‘People in fitness industry need to be careful what they put online’
5 JP McManus Pro-Am postponed for 12 months
Real news has value SUBSCRIBE