Brian Harman and Patton Kizzire one shot off lead in Honolulu 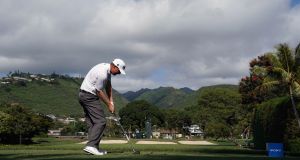 Tom Hoge hits his tee shot to the par-three seventh hole during the third round of the Sony Open at Waialae Country Club in Honolulu, Hawaii. Photograph: Gregory Shamus/Getty Images

Unheralded Tom Hoge birdied the final two holes to take a one-stroke lead after an eventful third round of the Sony Open in Hawaii on Saturday.

On a day when the pressure of making putts was put into perspective after local emergency authorities released an alert mistakenly warning of an incoming ballistic missile attack, Hoge signed for a six-under 64 at Waialae Country Club in Honolulu.

“To get that missile threat on your phone, you don’t know what’s going to happen,” Hoge said after posting a 16-under 194 total after 56 holes.

Halfway leader Brian Harman could not maintain his blistering pace but remained in the hunt for a third PGA Tour victory with a 68 that put him one shot back, alongside Patton Kizzire (64).

Defending champion Justin Thomas left himself with a lot of work to do, six shots back after carding a 66 that was highlighted by an eagle at the par-four second, where he holed out from 175 yards.

Ireland’s Séamus Power carded a one-over 71 to share 59th position on three under ahead of the final round on Sunday.

Leader Hoge, 28, who hails from North Dakota, has not finished higher than fourth in 75 starts on the PGA Tour, but is hopeful that the his limited experience of being in contention will help him over the finish line on Sunday.

“I’ve been close a few times,” he said. “I’m just going to go out and play another solid round, get it in the fairway and go from there.”

Kizzire started his round poorly with a double bogey at the first but, aided by a pep talk from his caddie, settled down before roaring back into contention with five consecutive birdies from the sixth hole.

The 31-year-old admitted that drawing on his recent success in Mexico, where he notched his first tour victory in November, had helped him recover.

“My caddie told me on the first hole in Mexico on the Saturday ‘you didn’t start too hot either’. He settled me in and I was able to get into the round and stay patient until I got hot,” he said.

“I think the experience I got in Mexico is invaluable and I’ll be able to use that tomorrow.”