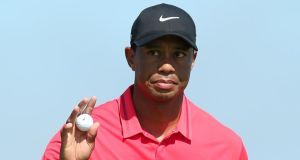 Tiger Woods has dropped out of the top 100 for the first time since 1996. Photgraph: Afp

For the first time since 1996, Tiger Woods is not among the top 100 golfers in the world rankings.

Woods, who has not played since he withdrew from the Farmers Insurance Open on 6 February, falls to No104 this week. The last time he was out of the top 100 was on 29 September 1996, when he was at No225.

The following week, Woods won the Las Vegas Invitational as a 20-year-old for the first of his 79 PGA Tour victories.

It is not clear when Woods will return. He said in February that his scores were not acceptable and he would not play until his game was in tournament shape.

Woods is not required to announce if he is playing the Masters until the tournament starts 9 April.

Meanwhile, Paul Casey will be returning to Augusta after securing his place at the Masters, which begins next Thursday.

The 37-year-old has not played in the season’s first major for the last two years but will return due to his position in the world’s top 50.

The Englishman, whose world ranking got as high as three in 2009, came into the new season outside the top 50 but a second-placed finish at the Northern Trust Open followed by a tie for third at the Honda Classic saw him move back in and his place at Augusta has now been assured. Casey’s best Masters finish was a tie for sixth on his debut in 2004.

India’s Anirban Lahiri, who has two European Tour wins this season, will be making his debut at Augusta alongside the Austrian Bernd Wiesberger while South Africa’s Branden Grace has earned an invitation for the third consecutive season.

1 Sideline Cut: Vignette shows why Bird is the true shark in The Last Dance
2 Ken Early: Liverpool fans, Bamber Gascoigne and a close shave in Istanbul
3 From TB to polio: GAA is no stranger to disease disruptions
4 Coming fourth in the Olympics didn’t change this fearless quartet, time did
5 World Rugby study advises removal of reset scrums to reduce Covid-19 risk
Real news has value SUBSCRIBE