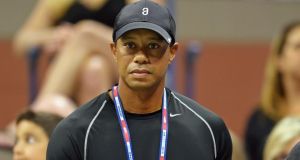 Tiger Woods attends the 2015 US Open in New York. Woods has announced he will not play competitive golf again in 2015. Photograph: AFP/DON EMMERT

Tiger Woods will be 40 before he plays competitive golf again, raising further serious doubts about his future in golf and his increasingly forlorn quest to match Jack Nicklaus’ record of 18 major titles.

Woods will not play again this year after back surgery on Wednesday, the former world number one undergoing a second microdiscectomy operation in 18 months.

“This is certainly disappointing, but I’m a fighter,” Woods, who turns 40 on December 30, said on his official website. “I’ve been told I can make a full recovery and I have no doubt that I will.

“I appreciate the fans’ concern and support. This is unfortunate, but these things happen. I’ve been injured before and played again. It won’t be any different this time.”

However, none of those players have suffered anything like the same number of serious injuries as Woods, whose last major title came in the US Open in 2008 and is currently ranked 283rd in the world.

The 14-time major winner missed the Masters for the first time in his career after his first back operation on March 31, 2014 and although he returned three months later, he played just four more events and ruled himself out of consideration for a Ryder Cup wild card.

Two weeks later Woods split from coach Sean Foley and appointed Chris Como as his swing “consultant” in November, but recorded an 82 in the second round of his 2015 tournament debut in Phoenix, a career worst at the time.

Following his withdrawal from his next event after just 11 holes due to back pain, Woods announced he would take an indefinite break to work on his game, returning to finish 17th in the Masters in April.

A new career-worst of 85 in the Memorial Tournament was followed by three consecutive missed cuts in major championships for the first time, although Woods did record his best finish of the year — a tie for 10th — after contending in the Wyndham Championship.

However, he was in pain from his back and hip during the final round in North Carolina and a recent medical check-up prompted a swift decision to undergo surgery, with Dr Charles Rich again performing the procedure in Utah on Wednesday.

“With the upcoming off-season, the decision was made to remove a small disc fragment that was pinching his nerve,” Rich said. “The microsurgery was a complete success and he was discharged Thursday night.”

Woods’ agent Mark Steinberg said the decision was taken to allow his client to get back to golf as soon as possible, but the 79-time PGA Tour winner will miss the Frys.com Open, Bridgestone America’s Golf Cup and his own Hero World Challenge.

“I’d like to send my regrets to Frys and all those associated with the America’s Golf Cup,” Woods said. “Those were two events I was really looking forward to playing. I was ready to start the 2015-16 PGA Tour season at Frys, and I was excited to join my good friend Matt (Kuchar) in Mexico City.”

Steinberg told ESPN.com that Woods was “frustrated but encouraged” following the operation, adding: “In listening to him, he’s encouraged that he’s going to be able to hopefully get this right again and be in a place where he can just go and compete and stop having to do the fits and starts.”