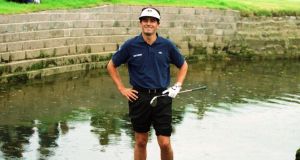 France’s Jean Van De Velde smiles at photographers as he looks for his ball in the Barry Burn on the 18th green during the final round at the 1999 British Open in Carnoustie, Scotland. Photograph: INPHO/ALLSPORT

The best golfers in the world. But are we seeing the best golf? And do we care?

The Masters. Four days of convoluted, privileged preciousness hosted by a golf club with a past not entirely unconnected with racism and sexism.

The irritating insistence on calling customers “patrons”; the grating tagline: “a tradition unlike any other”; the Butler Cabin, scene of some of the more sickly sweet interviews of our time. But each spring when golf fans see that first camera shot of the azaleas and Amen Corner they’ll know it could be four long days before they leave the sofa.

Strokes Gained statistics can be found on the PGA Tour website. Built upon the work of Columbia University professor Mark Broadie they are a powerful way of measuring putting success.

Introduced as an official tour statistic in 2011, instead of “how many putts were taken?” Strokes Gained Putting measures how many putts that player took compared to the amount their fellow pros would take from that same place.

The stats are made possible by ShotLink, a system introduced by the PGA Tour in 2003 to record data about every shot.

Trivia: Aaron Baddeley’s 336 yard driver on the 17th hole at the 2015 Valero Texas Open was the longest hole-out on the PGA Tour since 2003.

More importantly, in 2005 the PGA Tour started sharing the data with academics for research purposes.

A vast data repository waiting to be refined into knowledge, ShotLink offers economics and statistics fiends a chance to examine real-life datasets. Things that actually happened, rather than experiments set up in a lab.

This year’s CDW Shotlink Intelligence Prize was won by economists Daniel Hickman and Neil Metz from the University of Idaho and University of Central Oklahoma respectively. Their study? To examine the link between reward and performance. Generally theory would state that increased reward incentivises performance. However, studying every putt on the final hole of over 2000 PGA Tour tournaments between 2004 and 2012 they found that extremely large rewards had a detrimental effect.

Non-economists have a word for this: “choking”. The brain gets involved, the golfer overthinking an act performed thousands of times previously in life. Putts that in many cases they could, quite literally, make with their eyes closed.

The result is similar to that outlined by Dan Ariely in a 2009 experiment that offered relatively vast reward to subjects dependent on the completion of simple physical and memory tasks. But Hickman and Metz weren’t pretending to discover that people feel pressure, they were trying to quantify it. At the PGA Tour level the economics professors found that an increase of $50,000 in a putt’s value resulted in the player being 1 per cent less likely to make that putt.

Using putting to measure the effect of pressure on performance is understandable. The measure of ultimate success is simple: it goes into the hole or it stays out. Yet putting is the part of the game of golf that has the smallest impact on success.

Broadie performed an earnings analysis for the PGA Tour stating: “In the 2013-14 season the leaders in money earned per event gained 40 per cent of their total strokes from approach shots, more than from driving (35 per cent), short game shots (13 per cent) or putting (12 per cent)”. The long game is golf’s kingmaker.

And the golf you’ll see by the leaders on the final day?

According to work by WK Harrison and JL Salmon “players in first and second place after three rounds routinely perform worse during the final round of PGA Tour tournaments, particularly with their putting, than other players within the top 10 third-round positions”.

But we might not want golfing perfection. There’s a certain fascination in the skilful physical acts being performed but perhaps far more in the four-day soap opera.

The thrill of seeing an outrageous, tournament-winning recovery shot from the rough balanced by the perhaps equally thrilling horror of seeing a final round collapse.

The tournament frontrunner, putting to save their lead, slides an easy four-footer by the hole. “I could have got that,” the couch experts cry as the golfer on the screen holds their head in their hands. Joy and suffering. The human condition.