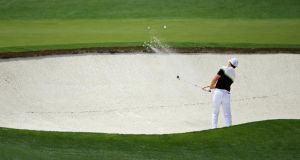 Rory McIlroy plays a bunker shot on the fourth hole during the third round of the Masters at Augusta National. Photo: David Cannon/Getty Images

Jordan Spieth refused to crack under mounting pressure as he continued to hold the US Masters third-round lead on Saturday as some of the biggest names in golf mounted a charge.

Holding a five-shot overnight lead, the ice cool 21-year-old American had threatened to run away with the year’s first major as he reached the halfway mark with a Masters record 36-hole total of 14-under 130.

The third round of the Masters is often filled with drama but with former winners Tiger Woods and Phil Mickelson and world number one Rory McIlroy on the charge the atmosphere around Augusta National was electric as Spieth’s composure was put to the test.

Despite the pressure, however, Spieth showed no signs of cracking as he extended his lead to six strokes with a birdie at the second.

He suffered only his second bogey of the tournament at the fourth but quickly got that back with a long birdie at the par-three sixth.

Spieth dropped another shot at the seventh but showed his resilience again with a birdie on the ninth to reach the turn at 15 under and his five-shot lead intact.

Mickelson, a three-times Masters champion, led the chase on the front nine with a tap-in birdie at the ninth hole to reach the turn at 10 under.

Charley Hoffman, playing with Spieth in the final pair, cruised through a steady outward nine, carding seven straight pars before collecting his first birdie to also get to 10 under.

Big-hitting Dustin Johnson, who recorded a single round Masters record of three eagles in the second round to soar into contention, was eight under after mixing two birdies and a bogey on his first nine.

Competing for the first time in two months after a self-imposed absence from the PGA Tour to retool his game, Woods has shown glimpses of the form that carried him to four green jackets as he scrapped to seven under with two holes to play.

Also on seven under with holes to play were American Kevin Streelman and Britons Paul Casey and Justin Rose.

McIlroy, bidding for a career grand slam, made a spectacular start to his round with an eagle on the par-five second.

On the brink of missing the cut with nine holes to play on Friday, the Holywood star grinded his way to eight under but stumbled to the finish line with bogeys at the 16th and 18th to sign for a four-under 68 and sit eight shots behind the leader.

Jason Day remains in contention despite bizarre series of events 22:39
Klopp says failure to make the Champions League will not see players leaving 22:35
Jakob Ingebrigtsen steps out and back in again to claim gold in Poland 00:39
Munster overcome gutsy Connacht to reach Pro14 final 21:56
Glory game sweet solace for Gündogan as he copes with lockdown loneliness 21:30
Here is your handy guide to sport on television this week