So many positives to take away from Doral

Now looking forward to going back Stateside and next two tournaments, the Arnold Palmer Invitational and the Valero Texas Open 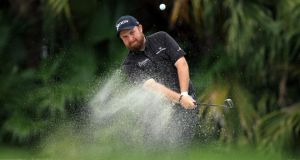 Life goes on, the earth keeps spinning and a bogey-bogey finish in a big tournament like the WGC-Cadillac Championship doesn’t take long to get over.

After finishing up on Sunday, I walked back to my hotel room with my coach Neil Manchip and by the time I got there to collect my bags for the trip home he had used the time to let me know how impressed he was with my golf; that he reckoned it was the best he had ever seen me on the course, competing-wise; and how mentally I was right up there, as good as I can be.

Within a couple of hours, we were on the flight home and I had a good craic with JP Fitzgerald about the whole club-throwing into the lake thing with Rory.

I was in great form and, rather than focusing on those two late bogeys, I knew there were so many positives to take away from Doral.

I’m already looking forward to my next two tournaments, the Arnold Palmer Invitational next week and the following week’s Valero Texas Open. And, of course, there’s the Masters looming ever closer on the horizon.

I’m into the field for Bay Hill due to my top-50 ranking in the world and one consequence of adding that tournament onto my schedule is that a planned three-day trip to Cheltenham was shelved.

Can you imagine what three days there would do to your body? Some other time, definitely. But my golf comes first and foremost and I am in a good place.

I’m fully aware that I am also taking steps towards banking sufficient FedEX Cup and/or official PGA Tour money to earn a card off the non-member route in America and I am taking the same attitude as I took when looking to break into the top-50 in the world last year: if you keep playing well, then everything else takes care of itself.

Golf is like that. No matter what you do in golf, everything – world rankings, FedEx Cup standings, sponsorship deals – comes down to what you do on the golf course and that’s all I try to focus on.

My return to Dublin coincided with the launch on Tuesday of Simply Golf, an innovative app – being rolled out first in the Irish market – that should have global appeal and especially so in the United States.

It is the first time I’ve ever got involved in a business venture outside of the golf course.

I spoke to my manager Conor Ridge and I really trust his opinion and views on business, so decided to go ahead with it.

So, these exciting times in many ways on and off the golf course.

One of my aims this season is to secure Special Temporary Membership on the PGA Tour, which means reaching 323 FedEx Cup points.

As of now, I am on 215 points from the tournaments I have played and on target to achieve that goal.

As I said, I will continue to focus on playing well and let things look after themselves as far as getting that PGA status is concerned.

It’s been a short break home. I travel back over to the US on Sunday for what will be a four-week stint up to the Masters.

I watched on television the last few holes of Pádraig Harrington’s win in the Honda Classic and, apart from being delighted for his success, there was a selfish part of me glad because it means he will also be in Augusta.

He’s been very good to me in my career and it will be nice to also have him there that week.

I hear he’s going to have his son Ciarán on the bag for the par-three contest, which will be quite a contrast to my caddie . . . my dad Brendan is going to carry my bag.

As far as getting to Augusta is concerned, I’ve decided to wait until the Sunday – a couple of days after my birthday – and prefer to get practice rounds in on Monday, Tuesday and Wednesday with the crowds there. I don’t go to other Major courses in advance, so there is no point changing my approach this time.

Golf’s a strange game. People seem to go along with and follow what everyone else does.

What I want to do is arrive there on Sunday, see what it’s like, get out there and play and just enjoy the week. Knowing the golf course is no good if you’re slicing it off the tee.

I will be confident in my own way of doing things, I’ve a great awareness in getting to know courses quite quickly. I know I will be grand.

I would be rather going in playing good golf than knowing the golf course, so I am going to spend the week between the finish in Texas and the Masters by staying at Lake Nona and practising.

More immediately, it is about getting to Bay Hill and playing again.

I believe it’s a good drivers’ course, quite difficult at times, and that should suit me. I feel fresh and am playing well. I think the two months I took off at Christmas was probably the best move I’ve made in my career so far.

I have only played three tournaments this year and, at some stage in each of them, I have been contending up towards the top of the leaderboard. I want to keep on doing that.