Simpson sets the tempo with second round 66 in the Barclays 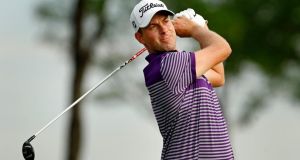 Webb Simpson hit a second round 66 that moved him into the clubhouse lead on 133, nine-under par, at the Barclays PGA golf tournament in Jersey City, New Jersey. Photograph: Reuters

Those who didn’t jump on the birdie train in the Barclays tournament – the first of the US Tour’s four play-off events that comprises the FedEx Cup – were left behind at Liberty National, where former US Open champion Webb Simpson set the tempo for low scoring with a second round 66 that moved him into the clubhouse lead on 133, nine-under par.

Simpson, though, wasn’t alone in shooting the lights out on a course softened by thunderstorms that disrupted Thursday’s opening day’s play, with much of the field only completing their first rounds yesterday before immediately going out for their second rounds.

One of them was Spain’s Sergio Garcia, who was forced into playing 30 holes yesterday as he completed his first round and then added a second round 66 to join fellow Europeans David Lynn and Freddie Jacobson on the 136 mark, six under. “I’d rather play too much than too little, because at least you get into a rhythm. When you’ve been waiting all day and you only play five or six holes (late), you feel the whole day has gone and you’ve pretty much done nothing,” observed Garcia.

An indication of how easy the course played yesterday was provided with Rickie Fowler’s course record-equalling 64 followed soon after an even better score, as Keegan Bradley signed for a record 63. Bradley, the former US PGA champion, and Fowler moved to join reigning US Masters champion Adam Scott in a group on the 135 mark, two shots behind Simpson.

‘Going forward’
“This is the first year I’ve entered the play-offs going forward with my game. Other years, I’ve been trying to hang on,” remarked Fowler,

Not everybody found the going to be so easy for scoring. Ian Poulter, who had been subjected to a “mashed potato” shout from a fan on his backswing late on Thursday evening which resulted in the spectator being removed from the course, missed the cut after rounds of 77 and 68.

Poulter described the course as “perfect” but explained: “Dropping seven shots in five holes (in finishing his second round) was stupid.”

If Simpson set the mark in the clubhouse, some of the later second rounds starters – among them Tiger Woods – made moves of their own. Woods, the world number one, opened with five straight threes (three birdies and two pars) to make inroads, moving to within two shots of Simpson, while Rory McIlroy, after an unpredictable round on Thursday that comprised three double-bogeys alongside four birdies and an eagle, was more conventional in starting his second round with three birdies in his opening four holes.

McIlroy rolled in another birdie on the seventh to move to four under. Graeme McDowell, who had also opened with a level par 71, was one under on his second round through five holes.

Neck injury
Ben Crane, who finished off a first-round 67 on Friday morning that left him three shots off the lead, became the second player to withdraw. Lucas Glover was forced to pull out with a neck injury.

Crane, who came to the tournament ranked 125th in the FedExCup, withdrew after four holes in the second round with a lower back injury. “Just been battling a disk injury, and just got to where I couldn’t play,” Crane said.

Crane, who needed to move into the top 100 to advance to next week’s Deutsche Bank Championship, will not earn any points this week so he will unable to play in the rest of the FedExCup Play-offs. Crane said he was very disappointed to have to withdraw.

“Just bummed,” Crane said. “I just figured some stuff out this week, and was really excited about it. And it showed up in the first round, and then, you know, obviously not feeling good prevents you from doing what you want to do.”