Shane Lowry: Time off should help me end the year strongly

One of my goals for 2016 will be to make that Ryder Cup in Hazeltine, that’s for sure 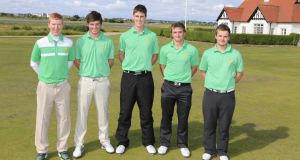 I’m really getting to enjoy these Q&As which generally are part of corporate gigs. I was at one the other night in Galway for McGettigans, one of my sponsors, and the craic was great.

You get all sorts of questions thrown at you, golf, of course, GAA, rugby – the lot! What’s your favourite course? What’s life on tour like? Who do you hang out with? What did you think of the hurling?

All things to all men and women really, and I love the interaction with the crowd and trying to get a bit of fun out of it, because that’s what it is all about.

There’s only question I won’t answer at any of these functions or corporate days no matter who asks or where it is. For some reason, which shows you how some people think, I’m often asked who my least favourite player is on tour and I’ll always skip that one like the plague . . . I’m not going there, ever.

Anyway, this has actually proven to be a good time for me to conduct some of my corporate commitments. People still want to hear about my win in the Bridgestone Invitational – and other things – and the bit of a lull in my schedule after the PGA and not getting into the FedEx Cup because of the PGA Tour rule in not awarding points for that Akron win retrospectively, has meant I’ve been able to get around the country a bit.

I had the commitment in McGettigans in Galway on Tuesday night and played Galway Bay (love it!) yesterday. I have a couple more obligations next week, with Bank of Ireland and Srixon, so I’ll be kept nice and busy on that front before I get back to playing tournament golf: my next outing will be in the Alfred Dunhill Links in Scotland at the start of next month.

In fact, these corporate commitments bring some structure to the week, that’s the way I look in on it, and it is something that I actually enjoy.

I’ve also started looking at my schedule for the rest of the yea, with a view to finishing strongly in the Race to Dubai – I’m currently in sixth position – and also getting up Ryder Cup points so that I am in a strong position going into the winter break.

One of my goals for 2016 will be to make that Ryder Cup in Hazeltine, that’s for sure. The qualifying started in Russia last week, but, as we know, it is a year’s long campaign and I’ve to map out a schedule that I think will be best for me.

I’ll definitely get back playing again in the Dunhill but I’m still looking at exactly what I will do after that because there are quite a number of options, and I want to make sure I get it right.

I’m still working out what is best for me, what ones to play in, where to go, how to make it work.

I’d love to get to Dubai with the chance to contend for the Order of Merit and taking time off at this stage of the year should have me fresh for, hopefully, a strong finish to the year.

“I actually plan on playing one more tournament after Dubai, in the Nedbank Challenge in Sun City which is the start of the European Tour’s 2016 schedule and a place that I love.

Although I haven’t played competitive golf since Whistling Straits it hasn’t been all fun and games or all about letting my hair down away from the course. I actually played quite a few rounds over the past week – at Milltown, Portmarnock, Luttrellstown Castle, Killeen Castle and Galway Bay – and have resumed my physical workouts with fitness expert Robbie Cannon over at Morton Stadium in Santry.

One of those rounds of golf I played in the past week was with the five Irish lads who will be playing in the Walker Cup. They were all there – Jack Hume, Gary Hurley, Cormac Sharvin, Gavin Moynihan and Paul Dunne (above,left) – and I got to play with Jack and Gary, two lovely lads.

Obviously I never played the Walker Cup because winning the Irish Open at Baltray in 2009 changed everything and I jumped over to the professional game. What happened, happened with regards me and the Walker Cup . . . and personally it has all worked out great.

I just hope the lads get what they want out of it because it is a big deal, and move on in whatever direction they go.