Shane Lowry: The Players in almost every way a Major test 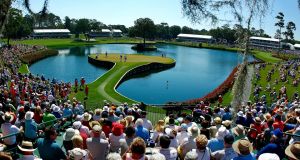 Ever got sucker-punched? I have, at this place a year ago. The 17th hole at Sawgrass is unquestionably one of golf’s most iconic par threes, a hole with football-style galleries massed on the grass banks.

And, if I’m honest, I kind of took it for granted. I saw it as an easy hole.

And I certainly didn’t expect to chunk my first ever competitive shot there into the water that runs from the tee box all the way to an island green. That’s what happened this time last year, on my first ever appearance in The Players, a tournament with all the characteristics of a Major.

In the practice days, I had routinely and comfortably hit wedge shots onto the green any time I played it.

There was no big deal about the hole. Or so I thought!

It was all so different when it came to the tournament itself. The walk from the 16th green to the 17th tee gives you too much time to think about what is coming up and there was definitely an intimidation factor when it came to hitting the shot.

What had seemed easy became as difficult as throwing a quantum physics question at me.

That’s obviously what the hole is designed to do, to intimidate, but now that I’m back for a second year I don’t expect such pressure again; it’s a big enough green and, measuring between 150 and 130 yards, and I expect to be hitting wedge all week. Certainly no more than a nine-iron.

The 17th hole is the 17th hole and, having decided to play only nine holes in practice on Monday, it was an easy decision which nine was on my to-do list. The back nine.

I couldn’t wait to get to play the 17th hole again, and, to be honest, there’s a great chance of a birdie if you hit the right shot because it is actually a pretty large green. It is one of those holes that can make you look bad but, if you can get your head around it, you can play it really well.

I’m a fan of these stadium-type par threes. I loved the 16th at the Phoenix Open and obviously my hole-in-one at the 16th at Augusta has good memories, but this hole is different with so much water in play from tee-to-green and it forms part of a brilliant and tough finishing stretch of the 16th-17th-18th that will make or break you in trying to win this tournament.

My whole game was pretty average and that doesn’t cut it over here.

I’m not the type of player to give myself a pass for a poor week or to put it down to rust or anything else. I was annoyed and disappointed.

After missing the cut, I worked on my game on Saturday and something clicked and I feel like I am hitting the ball better than I did at Quail Hollow.

I just need to go out there and be confident and be aggressive and play my own game and I think I will be fine.

The Players is a tournament with a great field and it is definitely one of those you’d love to have on your resume at the end of the career.

It’s one of the best courses we play all year. It is not one of those courses where you just have to hit it long. Here, you have to hit it straight, there’s a couple of tee shots when you do need to be long, but your iron play has to be good and the short game is key.

I was here all too briefly last year, missing the cut. But it is a course that is pretty much there in front of you and not at all like Augusta National where you need plenty of rounds to get familiar. You can learn this one a lot quicker.

The greens are quite small and, if you hit 14 greens in a round, I think you can give yourself a lot of chances. That’s what I aim to do.