Shane Lowry stays true to his word to provide something special 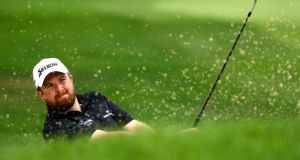 Shane Lowry of Ireland hits off the fourth tee during the final round of the World Golf Championships - Bridgestone Invitational at Firestone Country Club South Course. Photograph: Richard Heathcote/Getty Images

Lowry finished with the unlikeliest of birdies on the Par 4 18th, where, after driving into the trees down the left, his ball finished in a hole. Undeterred, he took his 52 degree lob wedge from his caddie Dermot Byrne and fashioned a remarkable recovery that went up and through trees, clipping a branch, and finishing on the green.

“I couldn’t believe when I seen the ball coming down on the green. Just trying to lag it down and it dropped in the front door,” said Lowry, who became the third Irish player – joining Darren Clarke and Rory McIlroy – as the winner of a WGC title.

A two-time winner on the European Tour – where he had previously won the Irish Open (2009) and the Portugal Masters (2012) – Lowry’s breakthrough PGA Tour win has given him elevated status in a life-changing victory and momentum ahead of this week’s USPGA at Whistling Straits.

Lowry’s work with strength and conditioning coach Robbie Cannon has led to the player adding extra yardage to his drives, which was apparent from the off with a number of huge drives of over 300 yards. On the Par 5 second, Lowry claimed his first birdie, holing from 15 feet, and, then, on the eighth, after a drive of 368 yards, he hit a wedge approach to ten feet and sank the putt.

With overnight leaders Jim Furyk and Justin Rose struggling, Lowry’s front nine of 33 moved him into the lead on his own. A loose tee-shot on the 10th seemed to have him in trouble, where he pulled his drive into left rough and was blocked out by trees. It was at that moment, though, that Lowry produced a quite remarkable recovery shot hitting a wedge up and over the trees, kicking off the greenside rough and rolling to within one foot of the hole for a tap-in birdie that moved him two strokes clear.

And Watson showed his own fighting qualities, with an unlikely birdie on the 17th where, after pulling his drive to the right and blocked out by trees, he hit a great approach to eight feet and rolled in the putt to close to within one of Lowry. But Watson’s failure to birdie the 18th meant it was all in Lowry’s own hands as he headed into the final two holes.

On the 17th, Lowry’s approach finished up against the collar of greenside rough and, again, he demonstrated terrific resolve. His pitch finished five feet from the hole, but, coolly and calmly, he rolled in the par save to retain his lead.

Ahead of his final round, Lowry had said: “My game has been good for a couple of years now. I feel like I’m driving the ball quite well, long and straight enough. I’m thinking, if I can hole a few putts, I can do something special. I just need to go out and do my own thing.” He proved true to his word, with a bogey-free round that

Graeme McDowell entered the final round hoping to make a charge, but could only sign for a 73 for 279 to drop to 17th.

Pádraig Harrington, troubled by a knee injury picked up in a knockabout game of tennis with his children a fortnight ago, finished with a 76 for 290 in 70th but more concerned about getting treatment ahead of this week’s PGA championship.

Simon Zebo set to return to Munster next season 13:00
Seedorf wants to ban players from covering their mouth while talking 11:44
Liverpool leaning on Salah more than ever right now 11:20
Four Leinster players nominated for European Player of the Year award 10:37
Chelsea have a free hit from here but may not get a better shot at it 08:49
Here is your handy guide to sport on television this week