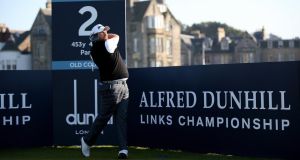 Shane Lowry plays off the second tee during the final practice round of the Alfred Dunhill Links Championship at The Old Course in St Andrews, Scotland. Photo: Ian Walton/Getty Images

Ireland’s Shane Lowry has reset his goals as he looks to build on the biggest win of his career, with a spot on Darren Clarke’s Ryder Cup team to take on the United States in Hazeltine next year right at the top of the list.

Lowry has missed the first four events in Ryder Cup qualifying after taking a six-week break from the game following a summer when he made his breakthrough in America with a victory at the WGC-Bridgestone Invitational.

The 28-year-old from Offaly feels he is now ready to challenge for a European place.

“I felt like the last Ryder Cup probably came a year too early for me,” said Lowry, who returns to action at the Dunhill Links pro-am tournament in Scotland today.

“I feel like a year later I can make the next team and that’s probably my main goal for the next five months.

“I know if I put myself in position, I can win a Major. I’m not saying I’m going to go out and do it next year, but if I give myself a chance I know I can.”

Lowry admitted that the victory at Firestone Country Club has already brought changes to his outlook, even his end of season goals.

“I’m looking forward and looking to do a few more things in the next few weeks. I’m hoping to see another win, to contend in a few tournaments and finish at the top.

“I’m sure there probably will be a little bit of rust but I’ve played a lot of games the last few weeks with friends. I feel like I’m playing well. Feel like I’ve never had a break at all. But I do feel like my hunger is back and that’s kind of what I wanted to get after a few weeks off.

“Sometimes when you go through a long season and after a win like this, if you keep playing golf can kind of catch up with you and you can get burned out. I’m hoping those weeks off will stand me in good stead . . .”

Lowry is one of 11 Irish professionals taking part in the Dunhill Links, which takes place across three of Scotland’s top courses – the Old Course at St Andrews, Carnoustie and Kingsbarns.

Walker Cup heroes Paul Dunne and Gary Hurley are both playing on invites after turning pro recently, with Dunne set to reacquaint himself with St Andrews after his heroics at this summer’s British Open. Hurley will have former Ireland rugby captain Brian O’Driscoll as his amateur partner.

Two-time champion Pádraig Harrington will link up yet again with JP McManus in a bid for a third title. They will play alongside Lowry and Rory McIlroy’s father Gerry, while McManus’s son Kieran will again join Peter Lawrie as they bid to retain the team title after a dramatic victory last year. The racing world is also represented by AP McCoy, who will play alongside Graeme McDowell.