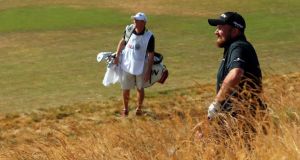 Both myself and my caddie Dermot Byrne left Chambers Bay singing the same tune, that it was one of the best and most enjoyable weeks we’d ever had at a golf tournament. Photo by Andrew Redington/Getty Images)

I love it when things fall into place, when goals are met and targets achieved. I still badly want to win a tournament and that is my main aim for the rest of the year. But, even without a win so far this season, the fact that I now have conditional status on the PGA Tour – and have all but wrapped up a tour card in the United States for next season – is affirmation that my game is in a good place and that I am doing all the right things.

The next thing I want to do now is to kick on and get that old win I’ve been chasing. I believe I’m getting close. I think my performance in the US Open showed that.

There was quite a lot of criticism from players of Chambers Bay but I never fell into that trap. Why bring negative thoughts into your game? Some players are very vocal about stuff in general but I don’t think it is the way to go about things.

Some went about their business the wrong way. My attitude is, go out there and get on with it. I don’t think it serves any purpose to criticise a course because, certainly in the case of the US Open, the USGA will set it up the way they want to.

So you have to prepare yourself mentally for things. After all, someone is going to be happy and to walk away with the trophy on a Sunday evening and this time that man was Jordan Spieth.

I didn’t win but a top-10 finish in a US Open, my second top-10 in the last four Majors, was something I was proud of and I quite liked the test and the challenge.

Both myself and my caddie Dermot Byrne left Chambers Bay singing the same tune, that it was one of the best and most enjoyable weeks we’d ever had at a golf tournament. That’s saying something given the amount of walking, up and down hills, that Dermo had to do lugging a heavy bag.

It was our first taste of really contending in a Major and was a lot different to my other top-10 in the Open at Hoylake last year because I almost reversed into that with a 65 in the last round.

At Chambers Bay, I was in the heat of battle from Thursday onwards and it was a great feeling. If anything, I surprised myself with how comfortable I was, how in control I felt and how much I enjoyed it. You can easily shy away from such situations because it is nerve-wracking enough, when every shot means so much. I feel like I sucked it up, hit some great shots under pressure and did everything I needed to do.

If my putter had been friendly to me on Sunday, I could have won the tournament. I didn’t, I know, but there was the bonus of earning enough to give me conditional status on the PGA Tour which had been one of my aims this season.

I have won almost $730,000 on the PGA Tour this season and, judging from last season’s money list, that is already within touching distance of getting my full card there for 2016, which was one of my aims starting out this year. I have the Open at St Andrews, the WGC-Bridgestone at Akron and the US PGA at Whistling Straits coming up and I only need a half-decent week at one of those to guarantee my full tour card. I will only add the Wyndham Championship onto my schedule if I haven’t secured the card. As a conditional member, I can’t get into the FedEx Cup playoffs, unless I win between now and then, but regardless I don’t think I will need to add on any tournaments like the Wyndham; the numbers are stacking up quite well as it is.

I’m not talking of deserting the European Tour or anything like that. I want to play on both circuits and it is obviously a help to stay in the world’s top-50, to be into the WGCs and the Majors which count on both tours. You have to play 15 events on the PGA Tour and 13 on the European Tour, so clearly getting into those big tournaments is a must. I have been hovering around the 40s and the 50s in the world rankings for most of this season and my aim is to kick on and get into the top-30. That would be a nice goal for the rest of the year.

On getting back from Germany, I had a bit of fun by caddying for my coach Neil Manchip in an Irish PGA event at Carton House on Tuesday and Dermo took over on the bag yesterday. My plan is to get in some links golf over the next few days – probably Portmarnock or The Island – before heading to the Scottish Open at Gullane and, then, on to the Open at St Andrews.

I’m really looking forward to that one.

1 Kevin McStay: Maybe a knockout All-Ireland Championship is the long-term solution?
2 No further players to be called up to Ireland squad to face Georgia
3 Gerry Thornley: Ireland don’t want to box themselves into a corner
4 Owen Doyle: Ireland suffered from officiating of the breakdown
5 Guardiola blames himself for Manchester City’s goal problems
Real news has value SUBSCRIBE

Guardiola blames himself for Manchester City’s goal problems 22:31
Klopp sings ‘multi-instrumentalist’ Firmino’s praises as Brazilian back on form 22:30
Fernandes on the double as Manchester United get their revenge 22:17
Giroud’s late winner sees Chelsea into knockout stages 20:29
Irish racing hopes ‘game-changer’ vaccines will accelerate return of spectators 17:00
Here is your handy guide to sport on television this week