Shane Lowry: My performances in the Majors have been very satisfying 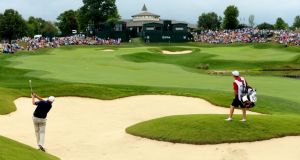 Shane Lowry plays his second to the 18th during the third round of the US PGA Championship at Valhalla Golf Club in Louisville, Kentucky. Photograph: Andrew Redington/Getty Images

The curious thing with golf is that so much of our focus is put on the Majors – playing in them, doing well in them, living and breathing them – and, yet, when they’re done and over, there is still so much left to play for. Unfortunately, me qualifying for the Ryder Cup didn’t happen this time but I’m taking the time since the US PGA to re-energise and re-focus on the rest of the season with the view to keep pushing on and make it as successful a season as I possibly can.

This is the first year I have played in three of the four Majors. The odd one out was the Masters and my big goal is to get to Augusta next year – and not only to get there but to do well! I left Valhalla on the Sunday, got to Chicago for a night out there before flying home and, in looking back on my performance in the PGA and my other Major appearances this year, there is an entitlement to feel they were pretty successful.

Okay, I missed the cut at the US Open in Pinehurst by one stroke; but I played well for 32 holes before a bad last three or four holes to finish in my second round, and I used that as a learning experience and bounced back with a top-10 finish in the British Open at Hoylake where I not only played but competed. And, then, I felt as comfortable in the PGA as I have ever done in a tournament in America.

As bad as I felt about being out in that monsoon on the Friday morning’s second round, I now see that as something too that you learn from and, if you can do that, then it wasn’t such a bad thing after all.

One area of my game which I am proud of is how well I am playing on Sundays. As my coach Neil Manchip pointed out to me the other day, in my last six final rounds that I have played going back to the BMW PGA at Wentworth, I have gone 68, 66, 67, 66, 65, 67 which averages out at being 5.2-under par. So, that’s not a bad way to finish tournaments on payday!

When I’m at home, away from tournaments, I work with Barry twice a week. I’d a good chat with him last week about setting goals for the rest of the year and on getting ready for the European Masters in Switzerland in a couple of weeks time when I get back playing again.

My fitness work really takes in mobility, stretching, a bit of cardio and some weights, but not too heavy. Barry talks about working towards doing proper weight training sessions but not just yet. Right now, it’s more about mobility aimed at getting me moving in the right way, trying to get more flexible and to also strengthen up.

I’m more committed to fitness work this year and I am getting the benefits. I did it for three months at the start of the 2013 season and fell off the bandwagon, so to speak, and then found I got tired as the season finished. I said I’d give it a proper go this year and I really feel the benefits. It gives me a routine when I am home and I feel better physically and mentally and much fresher.

The Majors have come and gone for me and, as it turned out, qualifying for the Ryder Cup was just out of my reach, which is why I decided to take three weeks off after the PGA.

It is back to work in Switzerland in a couple of weeks time for the first of what I hope will be nine tournaments to finish the year. I’ll be playing Switzerland, the Netherlands and Wales, taking the week of the Ryder Cup off, and then playing the Dunhill Links and the Portugal Masters before getting ready for a run in that hopefully takes in the four season-ending tournaments in the Race to Dubai.

There’s a lot of world ranking points and Race to Duabi points to be played for in the weeks and months ahead. I want to keep things ticking over the way they have been. At the minute, I feel I can stand up and hit it and it is going where I want to 99 per cent of the time.

I’m feeling quite good and I am going to give it everything until the end of the season. I feel like I am playing well enough to finish in the top 15 or top 10 in the Order of Merit and, if I can do that, the world ranking can look after itself.