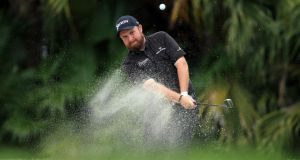 Shane Lowry is in San Antonio this week for the Valero Texas, his last tournament before the US Masters. Photograph: David Cannon/Getty Images

To be brutally blunt, that missed cut in Bay Hill was the kind of kick up the arse that I needed. I hadn’t missed a cut on tour – either in Europe or the US – since the Irish Open last June and, I’ll be honest, I didn’t see this one coming. If anything, I was playing so well in practice that I was guilty of complacency. It’s a lesson learnt, but, strangely, probably a good one too coming into the Masters.

Georgia is definitely on my mind. If anything, I am getting more and more excited the closer I get to the Masters. I am in San Antonio this week for the Valero Texas Open and, for the moment, I have to park whatever feelings and anticipation I have about playing in Augusta. I’m in Texas looking to bounce back from missing the cut at Arnie’s tournament, looking to play well and looking to contend.

Like I always say, I wouldn’t be here if I didn’t think I could win.

What happened in Bay Hill? I’m not used to missing cuts these days. I had played lovely in practice and went into the week expecting to play well. I didn’t. I played average on Thursday – a 75 – and it was just one of those bad days. Was it complacency? Maybe. I played poorly and I got stuck behind the black ball, so to speak. I played nicely in the second round on Friday but it didn’t really happen. It was hard to come back from shooting that first-round score, especially with the way the scoring was going. Even though I shot a 70, it wasn’t good enough. I wasn’t happy with myself.

Focused all the time

There is no room for complacency, no time to lose focus. It is something I will store and use in the future and look at again down the line.

After I missed the cut, I drove back to Lake Nona where I was staying, literally a half an hour’s drive, and got set for a weekend off. I had made 18 straight cuts up to Bay Hill, so having time off on the weekend of a tournament was unusual. I had Robbie Cannon, my fitness coach, over with me so we worked on some things and I spent time hitting a few balls.

If there was a positive to missing the cut, it was that, from thousands of miles away, I was able to live through what seemed to be a mad day’s rugby in the Six Nations with Ireland finally coming through as champions. We’re a great little country for sport, aren’t we? I followed the Wales-Italy match on Twitter, and then subscribed on my laptop to watch the Ireland-Scotland match . . . was back to Twitter for the England-France game, and followed the end of that match on facetime with my brother Alan. So, in some ways, as bad as I’d felt when it happened, it was a good weekend to have missed the cut. The rugby made up for it a little.

I flew up to San Antonio on Monday, having played and practised in Lake Nona in the morning. I didn’t play in the pro-am on Monday so my first practice round on the course was on Tuesday. I played with Marc Warren. This is a big week for him. He needs to break into the world’s top-50 here to earn his invite to the Masters. I fancy him to do it. I hope he does. I’ve been in this situation myself before and it is one of those where you try not to think about it and get on with it.

Reminds me of Europe

The main thing is to get through the first two rounds and see what happens. I can definitely do alright around the golf course. I am playing well enough. Going into a tournament, I try not to think about winning but I certainly won’t be afraid if I get into position.

This is my last tournament before the Masters. I have to park any feelings I have about the Masters. Once you get out on the course, your only focus is on what’s going on; not what’s ahead of you. You don’t think of anything else in your life that’s going on. For me, it is about the Texas Open this week, playing the first two rounds with Gonzalo Fernández-Castaño and Billy Hurley.

Late start in the first round, early tee time in the second. I’m fairly confident of doing okay.

I am heading back to stay in Lake Nona next week, before heading to Georgia to Augusta. My fiancé Wendy is arriving in on Monday. My coach Neil Manchip arrives in next Thursday. I’ve the small matter of a birthday that same day. I’ll have a week off to work on things, to get ready. All my tickets are allocated. I know who’s coming, who is staying with me. It’s all under control. I’m excited about the Masters but, for now, it’s Texas that I’m thinking about. And I’ll be trying not to get complacent.