Shane Lowry: It has definitely been the best year of my career 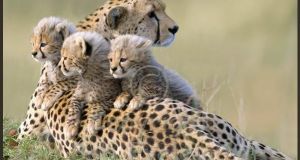 “The most amazing thing of all was seeing a mother cheetah teaching her three cubs how to hunt impala, a species of antelope. Our guide had never encountered it before”

Sometimes it’s all about timing, being in the right place at the right time. Yesterday was a bit like that. I’d taken a 5am alarm call, but not to play golf. Instead, we – myself and Wendy, my caddie Dermot and a friend of his Steve – got up early to go on safari to the game reserve at Pilanesburg near Sun City, and I definitely saw some things you’d never see around Clara.

It was my first time on a safari and it was one of the coolest things I’ve done all year. We got very close to rhinos, elephants, zebras, giraffes, but the most amazing thing of all was seeing a mother cheetah teaching her three cubs how to hunt impala, a species of antelope. Our guide had never encountered it before.

And I was talking to Tony Johnstone about it when I got to the golf club and he told me he’s been to safaris and game parks for over 50 years and never seen anything like it. So, right time, right place.

This is my start to the 2016 European Tour, and a win this week would be massive. Look at how Danny Willett kicked on last year.

But I am not trying to put any pressure on myself. It’s a limited, 30-player field with good prize money, and if I put myself into contention come the weekend all well and good. If not? It’s not the end of the world. The course is playing firm but the weather forecast is for some thunderstorms over the next few days, which should soften things up a bit.

It’s a very tight course and if you miss the fairways by a few yards it hits hard pan and the ball could fly anywhere. It’s going to play tough.

This is the end of the year playing-wise for me and, although the last few weeks in China and Dubai weren’t great for me, I can look back on a more than decent season.

I stayed on for a week’s holidays in Dubai after the DP World Tour Championship and didn’t actually touch the clubs for the whole week before flying down to Sun City on Sunday. It was nice to switch off from golf for a while because it had been a fairly intense four weeks up to then, pretty much four weeks without a day off.

I was disappointed with my results in China and Dubai; nothing was happening for me. I can only put it down as one of those things because I had been playing so well for a long time. I had been up there contending a lot in tournaments and it was disappointing to play like that.

I look on it as a kick in the backside but, no matter what, I can look back on the year overall as one where I achieved quite a lot.

I feel like I am improving every year and I think this is the year where I improved a lot. I definitely achieved more than I set out to do this year, so any time you do that you have to put it down as a great year.

I’ll return home next week, and I can enjoy the year that I’ve had and start the process of building towards what hopefully will be a better year next year.

And I found out on Twitter the other day that I had won the Sky Sports “Shot of the Year” on the European Tour for my approach into the last hole in the Bridgestone at Akron. It’s nice to win, and I had an inkling I might win because there weren’t too many other shots that won big tournaments like that when they needed to be played. I will take the accolade and say that it was a great shot, but, really, I pulled it about 10 yards from where I had intended. But I will take it.

If anyone was to ask what I considered my best shot of the year it would actually be the one I played from rough on the 10th hole in that final round in the Bridgestone.

I’d 105 yards to the flag out of the rough over a tree and landed it where I wanted. There was a good bit less fortune in that one than the one I hit on the 18th.