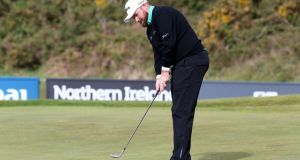 Shane Lowry using a sand wedge to putt on the 13th green during the Irish Open at Royal County Down. Photograph: Andrew Paton/Presseye/Inpho

I had an interesting phone call on Friday evening last after that incident with the putter at Royal County Down. My coach, Neil Manchip, had walked nine holes of that second round and had obviously seen what had happened when I flicked my putter and caught a rope stake in the ground. There was slight damage to the putter but even the slightest alteration to the club in any such act means it can’t be used again and I discarded it.

My sand wedge became my new putter. Neil couldn’t stay for the entire round – he had some family commitments back home – so when he called me that evening the issue was obviously the main topic on the agenda.

What did he say? Most of it I will keep to myself, if you don’t mind. I trust Neil hugely. He has been great for me since the first time I worked with him as an amateur and right the way through my professional career. The nuts and bolts of what he said to me on the phone was: “Shane, you are the person are and you’ve got to where you are today by being that person.You don’t need to change anything, no matter what people say to you or what people think.”

I was hoping he would respond along those sort of lines, because I know what I did wasn’t ideal in terms of promoting the game to young kids. It certainly wasn’t ideal either in terms of trying to win the Irish Open. Having to use a sand wedge as your putter for the vast majority of your round is putting an extra handicap on yourself, as if the tough course and the tough weather conditions weren’t enough.

Why it happened was just one of those things. I was frustrated, angry even, after missing a short putt. I acted on impulse and, if anything, the biggest lesson I have learned as a result of the whole thing is to be far more patient out on the course, especially with Majors like the US Open and the British Open looming.

People have asked me why I don’t work with a sports psychologist. I have worked with Enda McNulty a bit in the past, had some sessions, and I won’t rule it out in the future. But, to be honest, I am very happy with the team I have around me. Neil, my caddie Dermot Byrne, my management team at Horizon. I am who I am and the biggest thing I can learn, as I’ve said, is patience.

My mum, Bridget, gave me a bit of stick, not really giving out, but she said the interview I did with RTÉ afterwards was good. I thought I took it on the chin. Even Paul McGinley said to me he felt I handled it well. To be honest, it was going through my mind for 15 holes so I had time to think about it. And I’m not the first, and won’t be the last player, to take his frustration out on a putter.

Heart on my sleeve

It’s one of those things I will look back on in a few weeks and hopefully laugh about it. In the locker-room afterwards, players tend to give you some space but a few asked what had happened and, over the weekend, some came up to say it had been quite an effort to play the last 10 holes in one-under with a sand wedge as a putter.

What happened with the putter was my own fault and stupid on my behalf but these things do happen. I was lucky to make the cut, and probably deserved to miss it. But I actually battled well after it and was well in the tournament with four holes to play in Saturday’s third round but for one bad bounce on the 15th – and that was my tournament gone.

The one thing I take away from it all was that I wasn’t patient enough. I’d felt at the start of the week that level-par wouldn’t be far away and that’s how it proved. Patience is the key, so, as I say, onwards and upwards.

We’re all playing against each other as individuals, but when someone does something good he is entitled to a pat on the back. I was tired after the two weeks at Wentworth and Royal County Down. It’s fine when you’re playing, the adrenalin keeps you going, but afterwards the mental and physical exertions hit. I have a couple of weeks off before the US Open. I didn’t play in the Nordea Masters because I don’t really like the course, too many big open fairways for my liking; and I didn’t play in the Memorial because I am tight on the number of events I can play on the PGA Tour as a non-member and I want to include the US Open, the British Open, hopefully the Bridgestone and the US PGA in trying to get that PGA tour card.

Even though I am not playing competitively, I will be working on my game – especially my putting – in the run-up to the US Open at Chambers Bay. I’ve also some sponsorship commitments.

I was in Bunclody on Tuesday for McGettigans and I will be in New York next week for the Bank of Ireland. I’ll be staying on in the Big Apple for a couple of days before heading on to Chambers Bay.

I’m really looking forward to getting to Seattle and I believe – knowing how myself and Dermot prepare – that we will have plenty of time to get to know the course.