After my recent marriage to Wendy, I’m ready now to get back out on the road 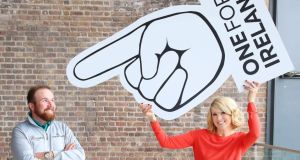 Shane Lowry and TV presenter Jenny Buckley at the launch of the One for Ireland campaign in aid of youth homelessness, coordinated by the Irish Youth Foundation. Pic: Marc O’Sullivan

I got a blast of reality when playing The K Club on Tuesday. Hailstones, sleet and the rest! After what has been a terrific few weeks personally – getting married to Wendy in New York after the Masters – there is nothing like a cold blast of the Irish weather at this time of the year to bring you back down to earth.

If I can just go back first of all to Augusta and what Danny Willett did on that Sunday to win the Masters, the thing that really surprised me was the surprised reaction from a lot of people that he got the job done.

I wasn’t at all surprised; his golf for the past year and a half has been pretty good, he’d a great season last year, and had brought his game on with him into this year.

His win was great for him obviously and for those of us on the European Tour. Since I turned pro, we’ve had a similar career path the whole way up and I was pleased for him. But I know that golf doesn’t owe you anything. So, I’m not going to say that, ‘if Danny can win a Major, I can win one’. It doesn’t work like that in golf. What it does do is give me an extra bit of motivation that I maybe needed to kick on and now try and win again.

I’m ready now to get back out on the road – with four big weeks coming up, one big tournament after another – starting with the Wells Fargo in Quail Hollow next week. I’ve had a great few weeks. Myself and Wendy got married in New York on the Tuesday after the Masters, the way we had planned it.

We’d spent the weekend there last year before the US Open, when I was doing a gig for Bank of Ireland over there, and the two of us fell in love with the place. Wendy had seen something on line about couples going away and getting married. We looked at each other and realised straight away that’s what we’d like to do. We like to be a bit different, don’t like following the trend of what people normally do. It was something different and something nice and we had a lovely week before coming home to see our families.

Now, I’ve got to get back to work and there’s a big four weeks ahead of me. I’ve got Quail Hollow next week, then The Players which is called the fifth Major and then the Irish Open which, for me, really is the fifth Major. And, then, I’ve got the BMW PGA Championship at Wentworth.

I don’t normally plan a schedule that has me playing four weeks in a row but I think the fact one of them is the Irish Open at The K Club and I can stay at home and sleep in my own bed makes it easier.

Also one of them is Wentworth and I only travel over on the Tuesday evening makes it easy logistically to play four weeks straight. I feel like my game is not that far away. I just need to try and put some more rounds together and give myself a chance in an event.

Life is very good for me, and I know just how privileged I am to be doing what I do for a living, which is why I have thrown my weight behind the One For Ireland campaign which takes place tomorrow throughout the country with the aim to raise €1 million to fund charities aiding youth homelessness.

I had wanted to get involved with a charity and was not really sure what to do until my manager Conor Ridge brought this to my attention a couple of months ago.

It is coordinated by the Irish Youth Foundation and is the first time that Focus Ireland, the Simon Community, St Vincent de Paul, the Peter McVerry Trust and Barnardos have come together under one umbrella fundraising campaign and I hope it is a big success and will get even bigger going forward.

Youth homelessness is a big issue and it is important that we get behind this initiative to try to raise one million euro in one day – through adding a euro to your bill at retail checkouts or by mobile donations – and help in a tangible way.