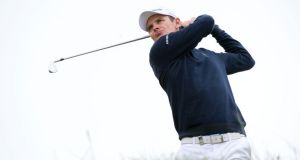 Justin Rose tees off at the fourth hole during the final round of the Scottish Open at Royal Aberdeen on his way to eventual victory by two strokes from Kristoffer Broberg from Sweden. Photograph: Kenny Smith/PA Wire

Justin Rose has not laid down a British Open Championship marker, he has battered one into the ground with a sledgehammer. Rose’s credentials were already strong, courtesy of his victory at the Quicken Loans National, before he took to the podium again, this time at the Scottish Open. A 65 at Royal Aberdeen yesterday was sufficient to win by two strokes from Kristoffer Broberg and five from Marc Warren, with whom he was tied at the start of the round.

At 16 under par, Rose conquered Royal Aberdeen’s stern test, albeit with wet Sunday conditions having a generally positive impact on scoring. He receives €627,000 for his efforts but an even more substantial boost to confidence.

Rose heads to the Open having won on each of his previous two starts. To make it three, including a major championship, would represent both a remarkable achievement and as close to a streak as is possible in modern-day professional golf.

Those who dispute whether winning the Scottish Open and Open Championship in back-to-back weeks is realistic need only glance back a year, where Phil Mickelson will supply a hefty counterpoint. It is little wonder Rose’s Hoylake odds have shortened to 12-1 in places.

A front nine of 31 yesterday meant the Scottish Open was Rose’s to lose. Warren played the same stretch in 35. Eight pars and a birdie on the closing half were enough to ease Rose towards victory, with Bronberg’s 66 rendering him the 2013 US Open winner’s closest challenger.

Offaly’s Shane Lowry finished strongly with a 66 to be the leading Irish player, on 10 under and in in a tie for fourth place, worth €148,039 to him.

“Justin seemed to be putting from outside me most of the time and holing them. Once he was out in front he was difficult to catch,” said Warren

“I think he made two bad swings all day and even they were a fraction out. He relied on his short game when he needed to. Obviously I don’t like being on the end of it, but it was a pleasure to watch.”

Rory McIlroy had set a course record of 64 on Thursday. That was bettered by Felipe Aguilar and Stephen Gallacher during day four; both shot 63.

McIlroy had the consolation of a third sub-70 round out of four, this time a 67, and a top-15 finish. He finished at seven under par, his position after round one.

“I see enough good signs in my game to give me some confidence heading into next week,” said McIlroy. “I’ve had three good rounds here. If I can just string a fourth in there, it would be great and obviously going into next week, that’s what I’m going to try and do.”

Pádraig Harrington closed with a 67 for a three-under-par finishing total. Gareth Maybin’s 72 left him on one over, one better than fellow northerners Darren Clarke and Michael Hoey, after a 74 and 72 respectively. Damien McGrane and Kevin Phelan both finished on five over. – Guardian Service