McIlroy will play in this week’s Frys.com Open, the first event of the new season 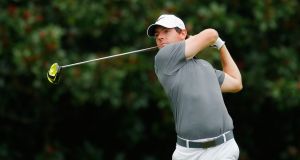 The Frys.com Open would not usually be able to call on players ranked third and seventh in the world given its position in the calendar, coming so soon after the Tour Championship in Atlanta and before the lucrative Final Series.

However, McIlroy and Rose were among eight players who entered a non-sanctioned match play event called the Turkish Airlines World Golf Final in October 2012, which was staged at the same time as the Frys.com Open.

And in return for being granted a release to play in Turkey – where Rose won $1.5million for beating Lee Westwood in the final – all eight players had to agree to make the trip to Napa in California at least once during the next three years.

McIlroy, Rose and major winners Charl Schwartzel and Webb Simpson have left it until now to fulfil their obligations, with Westwood, Hunter Mahan and Matt Kuchar having already played. Tiger Woods was due to compete this week but has been ruled out until 2016 due to a second back operation.

Also in the field is American Scott Stallings, who is free to compete again after serving a three-month suspension for violating the PGA Tour’s anti-drug policy.

Stallings reported himself to the Tour after realising a supplement he had been taking to combat chronic fatigue was prohibited.

The 30-year-old, who was ranked 154th in the world at the time of his ban but is now 209th, was advised by his doctor to take DHEA, an anabolic agent that is the precursor to testosterone production, but did not produce a positive test at the Humana Challenge in January.

Stallings said in July: “I regret my inadvertent mistake in not doing my homework to know for sure what was on the list of permitted and non-permitted substances. I take responsibility and accept the penalty imposed by the PGA Tour.”