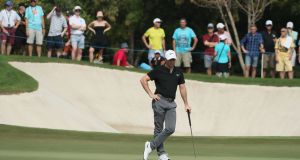 A week which started with him getting lost on his way to the course could end with Matt Fitzpatrick winning £1million and the biggest event of his career to date.

In Fitzpatrick’s defence, it was the driver of a courtesy car at the DP World Tour Championship who struggled to find Jumeirah Golf Estates and turned a short trip into a two-hour journey.

But all that will be forgotten if the 22-year-old Ryder Cup player from Sheffield can overturn a one-shot deficit in Sunday’s final round in Dubai and claim a third European Tour title.

“The car I got into took a few wrong turnings and the roads are really busy so it’s not easy to make up time,” Fitzpatrick explained after a third round of 66 left him in a tie for second behind France’s Victor Dubuisson.

“It would be great to get a third win, particularly an event of this stature. It’s my last round of the year and I want to finish strongly.

“I thought last year I played fantastically and this year I’ve struggled at times. It’s still been a great year, don’t get me wrong, but I feel last year was better. A good result tomorrow could change that.”

Shane Lowry sits at six under par following a third round 69, while Rory McIlroy sits a shot further back after carding 68 on Saturday.

Dubuisson carded an eagle and seven birdies in his 64 to finish 13 under par, a shot ahead of Fitzpatrick, Nicolas Colsaerts and Tyrrell Hatton, with Rafa Cabrera Bello, Lee Westwood and Francesco Molinari another stroke adrift.

Both of Dubuisson’s victories to date have come in the Turkish Airlines Open, but the 26-year-old Frenchman was third in this event in 2013 and second the following year.

“It’s my best score to date on this course,” Dubuisson said. “I’ve played well, made the good putts at the right time. It’s just a course I like.

“You have to carry the ball long. It’s target golf and I just like the way it sets up.”

On a day of low scoring, Colsaerts — who has not won on the European Tour since 2012 — fired six birdies and two eagles in his 66, but the best round of the day, and week, came from Cabrera Bello.

The world number 30, who was unbeaten on his Ryder Cup debut at Hazeltine, surged through the field with a superb 63 containing 10 birdies and a solitary bogey on the ninth.

“I knew I needed something special to catch up to the leaders, but I wasn’t expecting something this low,” said Cabrera Bello, who has recorded nine top 10s this season but has not won since the Dubai Desert Classic in 2012.

“It’s been a very, very good year and I’ve pretty much accomplished every single goal and many of my childhood dreams as well. Now I just need to get that win.”

Westwood had briefly held a two-shot lead when he followed a birdie on the first by chipping in for eagle on the par-five second, but the 43-year-old played the next 12 holes in three over par before three late birdies.

It could have been an even better finish for the former world number one after a superb approach to the 18th in near darkness, but he missed from four feet for a closing eagle.

Rory McIlroy fared even worse on the last after finding water with his approach, the resulting bogey leaving the defending champion to sign for a second consecutive 68 and eight-shot deficit.

“I think I turned a 62 into a 68 somehow,” the world number two said. “I hit a lot of good shots and didn’t really hole many putts and it was the story of the day with what happened on 18.

“(I hit) a great drive, second shot had 207 (yards) to the pin into the wind. Maybe just was a little too aggressive with it and pulled it slightly and just got punished for a bad shot.”

And McIlroy’s attentions were switched to Ireland’s clash with the All Blacks, he said: “It’s okay, I’ve got a great afternoon of sport coming up, so I’m going to go home and sit myself on the couch and watch a couple of football matches and a rugby match and all will be well.

“I want to go out and play well tomorrow, try and post a good score and feel good about myself going into the next couple of months before I tee it up again.”

Open champion Henrik Stenson remains on course to win the Race to Dubai after a 70 left him alongside McIlroy on five under, with nearest rival Danny Willett one over after a 76.

Alex Noren, who can deny fellow Swede Stenson the title by finishing in the top two, is in a tie for 13th after carding a 69 in pursuit of an incredible fifth win in 12 events.