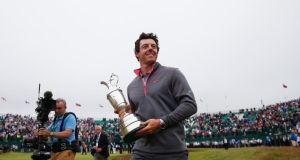 The media circus was in full flow at Royal Liverpool Golf Club on Sunday evening, as Rory McIlroy – just as he had done on the golf course – took it all in his stride. CNN. ABC. UTV. BBC. RTÉ. A myriad of media acronyms.

Everyone wanted a piece of the newest Champion Golfer of the Year and, with the Claret Jug always in close proximity, the 143rd Open champion talked until the point came that the old trophy required filling to make itself useful in another way.

Quite justifiably, McIlroy allowed his latest achievement to be celebrated. And, yet, his plans for the week ahead – which include a corporate commitment with Omega, one of his sponsors, and a visit to the GSK Human Performance Lab outside London before returning to the United States – would indicate that it is a case of getting back to business and focusing on other targets ahead.

The rest from tournament play will be short-lived: McIlroy returns to competition in next week’s WGC-Bridgestone Invitational before heading to Louisville in Kentucky for the US PGA Championship at Valhalla. After that, the FedEx Cup series swings into action and, of course, there is the Ryder Cup at Gleneagles on the horizon.

Already, the hype that we can expect for the US Masters at Augusta National next April – where McIlroy will seek to complete the career Grand Slam – is palpable.

McIlroy will still be 25 when he heads to the US Masters next April. As McIlroy put it, “Going to Augusta now with three legs of the Grand Slam under my belt, with just the green jacket to win, I will be going with a lot of motivation. I will be doing everything I can to prepare the best way I can. It will be a great chance for me to put that little milestone to bed and go forward.”

He added: “I wanted to be an established tour player by the age of 25 and maybe win a Major or have chances to win Majors and tour events. To be going to Augusta next year as a 25-year-old and have the chance to win the career Grand Slam, even I didn’t think it was possible. To have the chance to do that is not something I ever imagined.”

In looking down the line to the Masters next April, McIlroy revealed he would be making contact with Jeff Knox, the local amateur who acted as his marker on the third round of this year’s tournament when he survived the cut on the mark. “He’s the best I’ve ever seen on Augusta’s greens,” said McIlroy, who plans on making a couple of trips there and using Knox’s knowledge in advance of chasing that final leg of the Slam.

“It has been a difficult 18 months at times since the start of 2013. Winning the Claret Jug makes it all worthwhile. It is maybe like Congressional because I had to silence a few doubters about how I could play links golf, how I could handle a lead, how I would play on a Friday. Winning the Open Championship, the home Major for guys like myself, it is a very special championship and I am very honoured.”

To put some perspective on where McIlroy has graduated to in the great scheme of things, he has now won more Majors than Greg Norman, Jose Maria Olazabal and Bernhard Langer. And, as he eyes that final leg of the Slam, it should be noted that the legendary players like Arnold Palmer, Tom Watson, Lee Trevino and Walter Hagen who all finished up their careers one short of the mark.

Only five players – Nicklaus, Woods, Ben Hogan, Gary Player and Gene Sarazen – have actually managed to win the Grand Slam. That is the territory that McIlroy is on the verge of joining and which he is targeting.

Nicklaus, the greatest player of all time, has taken to McIlroy. Recently, he welcomed the Ulster man into his office in West Palm Beach to provide him with some words of wisdom. In a message posted on Facebook after McIlroy’s win, Nicklaus noted; “I like his swagger. I like the way he handles himself. I like his desire to be great. I like his desire to do the things he needs to do. It like that in a young guy. He’s cocky in a nice way.”