Rory McIlroy curtailing his schedule to maximise his Major chances 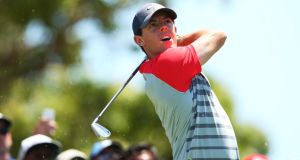 The old adage that “less is more” would appear to have struck a chord with the world’s two best golfers, as Rory McIlroy and Henrik Stenson kick-start their new seasons in the Abu Dhabi Championship with designs on reducing their tournament schedules for the year ahead.

In 2013, Stenson played 31 events and reduced that number down to 28 last season.

Although he has committed to playing Abu Dhabi this week and the Dubai Desert Classic in two weeks time, missing out on the Qatar Masters in between, McIlroy is determined to map out a playing schedule – akin to the way Tiger Woods did in his heyday – that maximises his chances of contending in the Major championships.

Adam Scott is another who has adopted a similar strategy.

The fact that all four Majors and the four WGCs count on both main tours does help McIlroy in his efforts to streamline the tournaments he plays in.

McIlroy – one of four Irish players competing in Abu Dhabi, alongside Darren Clarke, Michael Hoey and Damien McGrane – is the headline act in Abu Dhabi where the field is bolstered not only by the presence of Stenson but also by American Rickie Fowler who appears more inclined to play globally than many of his fellow countrymen.

The tournament will mark the world number one’s first outing of the year and first competitive appearance anywhere in over six weeks.

McIlroy’s last outing of 2014 – a year when he topped the money list on the European Tour by winning the Race to Dubai and was voted ‘Player of the Year’ on both the European and US Tours – came in Australia in late November.

However, the 25-year-old has spent the last week practising in Dubai before heading on to Abu Dhabi. McIlroy, in fact, has a good record in Abu Dhabi without actually lifting the trophy; he has finished runner-up for the past three years!

In the horses for course theory, though, it is Martin Kaymer who is unquestionably the sultan of the Abu Dhabi track. The German has won three times on this course (in 2008, 2010 and 2011) and, if he were to win the title for a fourth time this week, he would become just the fifth European player to win the same European Tour event on four or more occasions. Bernhard Langer, Seve Ballesteros, Nick Faldo and Miguel Angel Jimenez are the only players to have accomplished such a feat.

While McIlroy kickstarts his season’s work in the desert, Ireland’s other highest ranking players Graeme McDowell and Shane Lowry are in no rush to return to competition.

McDowell is due to start his season’s work in the Dubai Desert Classic while Lowry won’t start again until the Farmers Insurance Open at Torrey Pines on the PGA Tour. The Offalyman has secure sponsor’s invites into both Torrey Pines and the following week’s AT&T Pebble Beach pro-am.