Rain eventually brings round three of Safeway Open to a halt 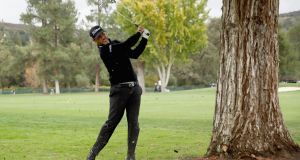 Halfway leader Scott Piercy complained to officials conditions were not suitable towards the end of his third round at the Safeway Open. Photograph: Getty

Play was halted late in the third round at the Safeway Open on Saturday after halfway leader Scott Piercy complained about the waterlogged conditions in northern California.

Officials allowed play to continue for some two hours after the rain started pelting down at the Silverado Resort in Napa, and the course became increasingly saturated.

Piercy would not play a shot from just off the 16th green, calling a rules official to say there was too much water between his ball and the hole.

After several minutes, chief official Mark Russell decided to halt competition, with deep puddles covering many parts of the course.

The 16 players who did not complete the round will resume early Sunday, with the final round still scheduled to be completed on time.

American Justin Thomas appeared to sum up the mood of the players with an expletive-laden rant about the conditions after missing a par putt at his final hole.

The borderline unplayable conditions were not the only thing Piercy had reason to complain about.

His seven-iron at the par-three 11th landed in the hole, but rather than celebrate an hole-in-one, he watched in dismay as the ball clattered against the flagstick and ricocheted 50 feet away.

The rebound cost him two shots, and he trudged off with a par instead of an ace.

Love tears them apart in stunning Epsom Oaks romp 16:33
Valterri Bottas pips Lewis Hamilton to pole in Austria 15:43
Chris Martin steals a point for resurgent Derby against Forest 15:23
Brighton see off doomed Norwich to edge closer to survival 15:09
Eamon O’Shea: We spent quite a bit of time talking about older people rather than to them 08:00
Here is your handy guide to sport on television this week